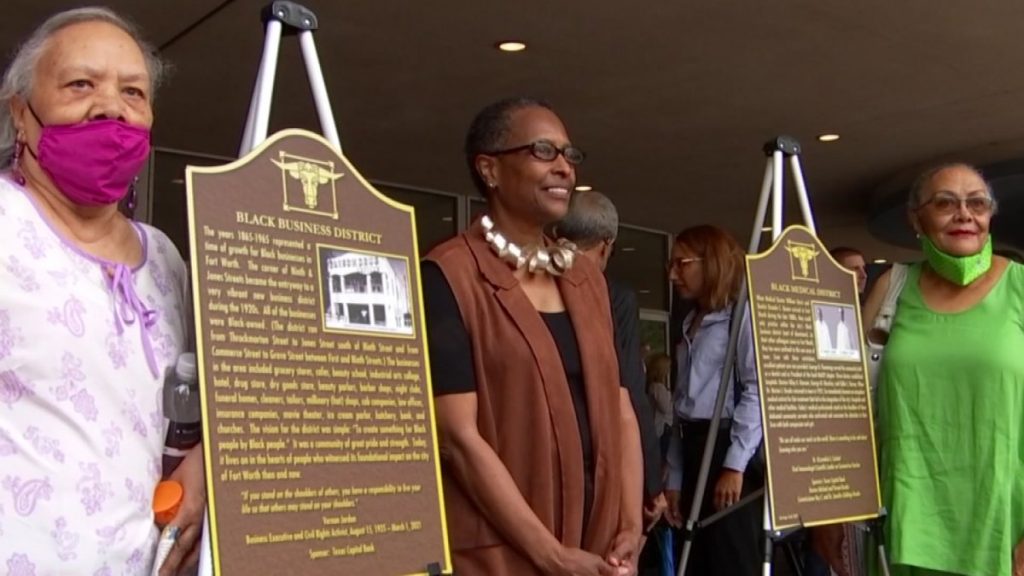 Fort Worth Black business leaders and doctors who built businesses by helping clients who were turned away, are now being celebrated for their efforts.

Tourists and locals who follow the Fort Worth Heritage Trail can now learn about Black doctors and entrepreneurs who overcame many challenges, including racism and segregation, to help build the city.

Community leaders and students cheered at the sight of two new historical markers honoring doctors and business leaders who helped build the Fort Worth they call home.

“He instilled in each of his five children the responsibility to give back to the community that has been so good to us,” Brooks said.

Now more people will know a lot more about him and others, thanks to Brooks’ wife.

In Fort Worth, Black business leaders and doctors who built businesses by helping clients who were turned away are now being celebrated for their efforts. NBC 5’s Brittney Johnson has the honor for the men and women who paved the way for the success of many others.

Jennifer Giddings Brooks says she was researching the city’s history and Heritage Trail during the pandemic.

“I just felt like the Black business district was missing,” Giddings Brooks said.

So she got to work making calls and presentations. On Friday, several partners, including the Fort Worth Chamber and Black Chamber of Commerce and Texas Capital Bank unveiled two markers that will go up on the road leading to the convention center, honoring the Black Medical District and Black Business district.

Downtown Fort Worth near 9th and Jones Streets was once the entryway into a vibrant Black business district with Black-owned restaurants, a hospital and a hotel.

They’re now gone, but advocates and educators like Giddings Brooks are making sure we remember their stories.

“One of my favorite quotes is ‘to predict the future you need to celebrate the past’ and you need to know the past,” said Giddings Brooks.

Advocates and educators invited students to participate in the event, hoping to inspire them to work hard and aim high.

“I hope people see that we may have not had anything at one point, but the more we strive to push to what we want, we will get it,” said Young Men’s Leadership Academy student Joshua Irving.

You can learn more about the markers and see a film exploring the history of the Black Medical and Business Districts at FortWorth.com.