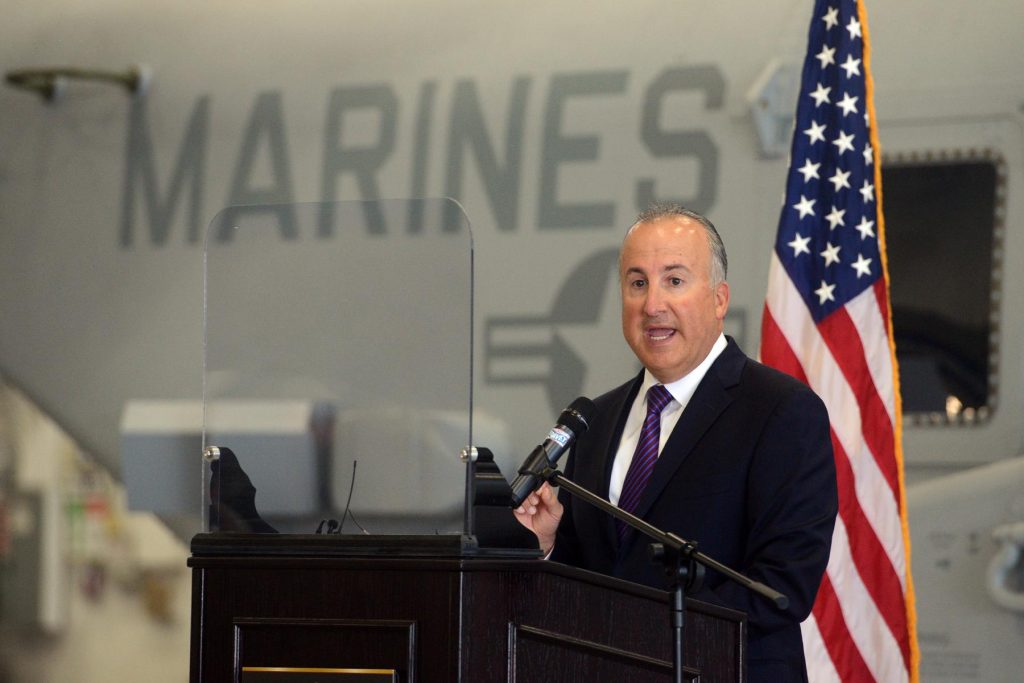 Sikorsky’s top executive is expressing confidence in the company’s design of a new helicopter to replace the Pentagon’s Black Hawk workhorse — while describing the final choice as “existential” for the future of one of Connecticut’s biggest manufacturers.

Paul Lemmo spoke last week as part of the “Made in Connecticut” forum hosted in Trumbull by the Connecticut Business & Industry Association. Lemmo is in his first year as president of Lockheed Martin’s Sikorsky subsidiary, which has about 8,000 employees at its headquarters plant in Stratford and satellite locations in Bridgeport, Shelton and Trumbull.

That does not include some 250 other companies in Connecticut to which Sikorsky farmed out some $450 million in work in the past year, according to Lemmo.

Sikorsky is partnering with Boeing on the Defiant X to replace the Black Hawk used by the U.S. Army, with derivative helicopters, including the Navy’s Seahawk, the Pave Hawk in the U.S. Air Force fleet and the Coast Guard’s Jayhawk.

The Defiant X’s signature feature is a stacked set of counter-rotating blades, designed to provide far more stability and maneuverability. That allowed Sikorsky engineers to tack on a rear propeller pushing the Defiant X to a top speed in excess of 300 mph. Lockheed Martin has posted videos online of the prototype helicopter performing maneuvers.

Speaking Friday in Trumbull, Lemmo noted that Lockheed Martin uses a jet airplane to trail the helicopter during observations of speed tests.

More than 4,000 helicopters are in service globally today based on the Black Hawk design, which the U.S. Department of Defense wants to improve on for the next generation of aircraft under its “Future Vertical Lift” vision.

The Army also wants an armed scout helicopter faster and nimbler than its fleet of aging Boeing AH-64 Apache helicopters. For that contract, Sikorsky is pitting its Raider X — which like the Defiant X has a dual rotor set — against Bell’s Invictus helicopter prototype. The Black Hawk replacement is the larger of two initial programs.

“Think about our 40-year franchise and if we don’t win that program, what that means for our business,” Lemmo told CBIA members Friday in Trumbull. “One of these is upside — the other is existential, because it’s going to replace something we’ve produced for 40 years.”

As its own candidate to inherit the Black Hawk’s mission, Providence, R.I.-based Textron is offering the Bell V-280 Valor, the newest iteration of its “tilt-rotor” design. Bell developed the technology originally for V-22 Osprey aircraft used by the Marines, with wing-mounted rotors providing lift before swiveling to a vertical position to fly forward like a turbo-prop airplane.

The Department of Defense has not said whether it would consider both the Sikorsky and Bell designs, or otherwise subcontract a portion of manufacturing work to the losing bidder as a way to maintain multiple helicopter factories. Bell has two plants in Texas where it is based, while Boeing has helicopter production lines outside Philadelphia and Phoenix.

The Pentagon created such an arrangement for its new fleet of Columbia ballistic submarines being manufactured at General Dynamics’ Electric Boat plant in Groton, with Huntington Ingalls Industries making several large sections of Columbia hulls and superstructures at its Newport News Shipbuilding plant in Virginia.

Connecticut ranked sixth on a Pentagon tally last month of spending across the 50 states, leading all Northeast states with $23.6 billion in the 2020 fiscal year, including more than $4 billion for Lockheed Martin facilities in Connecticut.

Nationally, Lockheed Martin was the top contractor with $73 billion in contracts spanning aerospace, ships and other military needs. That was equal to the next three largest suppliers combined in General Dynamics, Boeing and Raytheon Technologies — which itself is a major Connecticut employer through subsidiaries Pratt & Whitney and Collins Aerospace it picked up in its April 2020 acquisition of United Technologies.

Lemmo alluded to the problem of keeping talent in house, in discussing Sikorsky’s transition from designing prototypes of the new CH-53K King Stallion for the U.S. Marine Corps. The manufacturer is now ramping up for full production of as many as 200 helicopters, as well as 18 for Israel and possibly more for other U.S. allies.

Lockheed Martin is more than halfway through a $1 billion upgrade of its Sikorsky plant to accommodate CH-53K assembly and other programs like the Combat Rescue Helicopter for Air Force missions over hostile territory, and the VH-92A for a new White House helicopter fleet.

“We’ve kind of wrapped up with the CH-53K development — we need something for our engineers to do,” Lemmo said. “Yeah, we have great products — but the products are created by the people.”