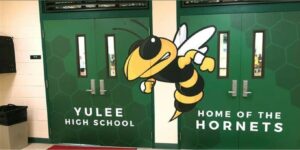 A group of Black students at Yulee High School in Florida have been suspended after confronting two white students who recorded a racist video. The white students faced no disciplinary action.

The video, which has since gone viral, shows two white boys – one wearing a white hood – using the n-word. According to News4Jax, the video was sent to several Black students at Yulee via Snapchat, but the sender was not one of the two students in the clip.

The students who received the video then approached the boys who recorded it on campus, which resulted in what parents are calling unfair disciplinary action.

“The district was made aware of a video that was recorded this summer but just recently sent on Snapchat to several Yulee High School students,” said Mark Durham, Assistant Superintendent of Instruction for Nassau County Public Schools. “The video contained racial slurs and images. It resulted in a physical altercation involving several students. Disciplinary actions consistent with the district’s code of conduct have been given to students involved in the altercation and in sending the Snap Chat [sic] video.”

The two boys in the video were not suspended, WJCT reports. When several football players at the school threatened to skip last week’s homecoming game in protest of the way their classmates were treated, Yulee principle Yvon Joinville told them that doing so would forfeit their spot on the team for the rest of the season.

“This is an issue of outward racism in our school that’s not being brought awareness to,” said Melissa Ricks, whose child was one of those suspended. “All we need is an administration that cares about the issues and is willing to publicly bring awareness to our students and our community, that they are actively looking for ways and resolutions to bring in the parents, bring in the students, and figure out a way to bring these kids together and stop allowing the separation.”

On Oct. 27, Ricks led a group of parents in a meeting to address not only the video, but also the way it was handled by the school. Their next step, they said, was to take their grievances to the school district.