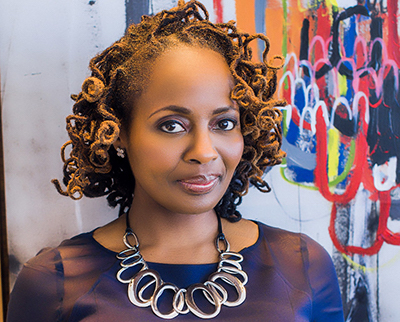 For Sheryl Ponds, a native Washingtonian and founder and CEO of Dai Technologies Corporation, the future’s now — and it’s exciting.

Ponds’ DaiTechCorp counts as the region’s first and only company founded by a Black female focused on solutions that make electric vehicle (EV) charging accessible to all drivers.

“I decided to jump into this business now as opposed to waiting until it becomes mainstream,” Ponds said. “It’s going to be big once everyone figures out that electric vehicles are not just a passing fancy.”

Ponds, whose love of all things STEM began in middle school, noted that drivers who live in dense urban and multi-family settings remain discouraged from embracing the technology without equitable access to EV charging stations.

“Just the presence of one EV charger in an apartment or retail garage would influence more residents, patrons and employees to embrace electrified transportation,” Ponds said.

She also addressed some of the hesitancy in switching to electric vehicles, reiterating what she’s previously stated on several podcasts.

“Everyone is not mentally ready for EV adoption,” Ponds said. “It’s understandable but I call it suffering from range anxiety – the fear of getting stuck on the road without an outlet to charge an electric vehicle.”

“It’s embarrassing and I get it. You feel vulnerable,” she said.

But the University of Tennessee graduate who majored in mechanical engineering asserted that hesitancy could have cost her the opportunity to make history with DaiTech Corp.

“There are many individuals like myself who require greater access to EV charging stations before purchasing their first EV,” Ponds noted. “I launched my company because I figured that if this new era of automotive transportation is going to take hold in the greater DMV area, it may as well start with me.”

Eventually, Ponds put all of her resources into building the company. Earlier this year, she was chosen to provide home charger installations for Volvo Cars’ new electric vehicle owners in the D.C. metropolitan area.

“For the sake of our planet, electric vehicles must be the wave of the immediate future,” Ponds stated after the announcement.

The agreement revealed that two companies, Qmerit and Volvo, shared her commitment to ending range anxiety and promoting electric vehicle adoption, she said.

“Consumers will not embrace the alternative to gasoline-powered cars until they believe their access to electric vehicle charging stations is convenient and secure,” Ponds said.

She said she aims to make it practical for the average driver from an urban or underserved market to switch from a car fueled by “dinosaur juice” to one energized with electricity.

“If we have enough power to cut on your lights and operate things around the house, then it’s just a matter of time before we can figure out a way to harness enough power to move cars with this [new] technology” she said. “We have mobile devices that we have to plug in every day and we plug them in every night so they’re charged and ready. As I see electric vehicles, it’s no different.”

“Let’s write our electric vehicle adoption story together,” she said. “If people reach out to me, I’d love to help them stare down their anxiety.”

I’ve worked for the Daily News of Los Angeles, the L.A. Times, Gannet and the Times-Tribune and have contributed to the Pocono Record, the New York Post and the New York Times. Television news opportunities have included: NBC, MSNBC, Scarborough Country, the Abrams Report, Today, Good Morning America, NBC Nightly News, Imus in the Morning and Anderson Cooper 360. Radio programs like the Wendy Williams Experience, Tom Joyner Morning Show and the Howard Stern Show have also provided me the chance to share my views.