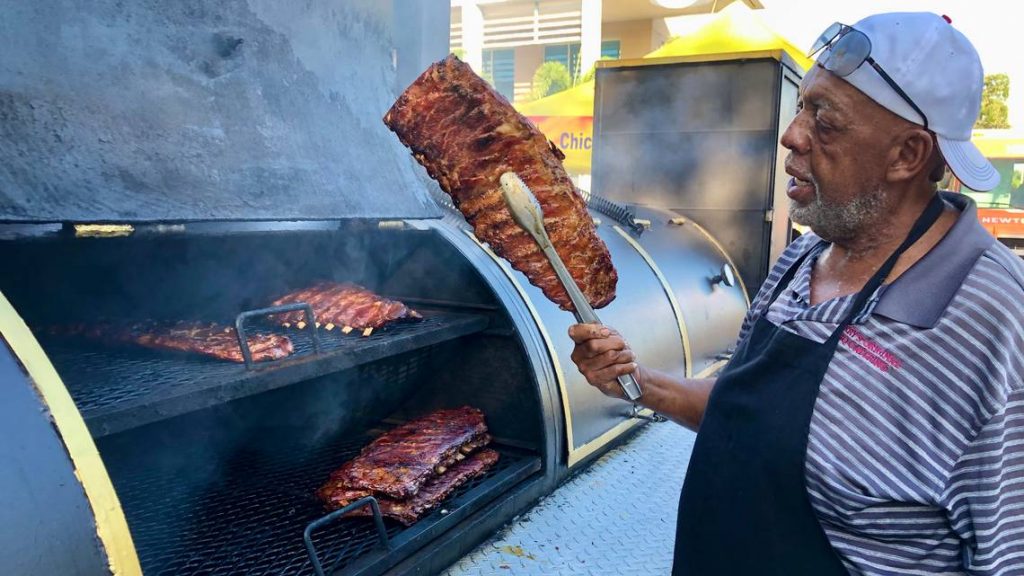 Perry Washington, 71, has been in the food preparation business for most of his life.

But it wasn’t until 2006 that he went into business for himself with his own barbecue sauce and Perry’s Original Roadside BBQ Catering, serving savory brisket and fall-off-the-bone-tender ribs from his super-sized smoker and food tent.

“I can’t retire, I am having too much fun. I can’t just quit. It’s a hobby and I’m making a living off it. There is never a dull moment,” he said Thursday evening, while checking his smoker in the parking lot of State College of Florida, Manatee-Sarasota, 5840 26th St W.

Perry’s BBQ and Miss Susie’s Newtown Kitchen were specifically invited to the Elevating CommUnity event at SCF because they serve delicious food — and because they are Black-owned businesses.

When Washington heard that the purpose of Elevating CommUnity, jointly engineered by the Manasota Black Chamber of Commerce and the Lakewood Ranch Business Alliance, was to foster the growth and creation of more Black businesses, he knew right away he wanted to participate.

“I didn’t have to think twice,” he said.

Veronica Valdez, a vice president of Enterprise Florida, whose specialty is minority and small business entrepreneurship and capital programs, was one of the guest speakers at Elevating CommUnity.

Valdez talked about the importance of small business in America, the role that it plays in creating jobs, and in building generational wealth in families.

And she talked about how that out of more than 30 million small businesses in the United States, only about two million are Black-owned. Small businesses are a key to realizing the American dream, she said.

Perry Washington didn’t hear Valdez or the other speakers — he was too busy selling barbecue — but he already knows the value of owning a business and building generational wealth.

He is grooming is two daughters to take over Perry’s BBQ.

Planning for Elevating CommUnity started in July 2020, when members of the Lakewood Ranch Business Alliance challenged themselves to look at the world through the lens of diversity, said board member John Holz.

Seeing the racial reckoning that was reaching from corporate board rooms to street corners, Alliance members decided they wanted to walk the walk to help the cause of inclusion and fairness.

Tarnisha Cliatt, founder, president and CEO of the Manasota Black Chamber of Commerce, welcomed the outreach.

“Let’s stand up against racial disparities and let’s unify the community,” she said.

Thursday’s event was just the start of the journey, where conversations are meaningful and sometimes painful, Holz said, but it was a good start.

“Tarnisha got the talent and I got the food trucks and the venue,” Holz said.

DuBose, CEO of DuCon Construction, talked about his early struggles as a under-capitalized builder, trying to break into a business dominated by people who didn’t look like him, who had greater financial resources and staff, and a network of friends and associates outside his orbit.

“As a Black-owned business, it is heart-warming to see such activity in all of us. It should be totally inclusive. We ask that we come with open hearts and open minds and loving out neighbor,” DuBose said.

Valdez encouraged participants in Elevating CommUnity to reach out to Enterprise Florida for support and guidance on programs and financial help to support the goal of creating more Black-owned businesses.

“When Black businesses are strong, the economy as a whole is strong. Consider this a call to arms. The call to arms is more real than ever. Minority and Black-owned small business can make a generational difference, create generational wealth, create opportunity,” she said.

DuBose talked about some of the local government incentives that are available to help spur the creation of minority-owned businesses.

“Those incentives allowed me to build relationships with people I didn’t know, who I didn’t grow up with, who don’t look like me. We all have to get out of our comfort zones,” DuBose said.

Freeland Eddie added: When a community shares a goal to lift Black businesses, “we can move the needle, when my struggle becomes your struggle. If the rung is too high, if I can’t get to the rung, you’re always going to beat me.”

What it takes to break the glass ceiling

Keynote speaker Hugh S. Campbell, a graduate of the U.S. Military Academy at West Point, served 10 years on active duty as a communications officer in the U.S. Army providing advanced communications for joint and special operations missions. His active duty service culminated as the chief of plans for an elite communications unit at MacDill Air Force Base.

Later, he smashed the glass ceiling in the corporate world and founded AC4S.

Campbell offered an impassioned plea for more inclusion, fairness, and opportunity, and for giving a person a chance who may not appear to be the best-qualified job candidate.

“You have to be accountable. You have to move the needle,” he said, adding that good things can happen when everyone can get into the room.

“Keep at it. I hope you can see it yields positive results that change peoples’ lives,” he said.

At the end of Thursday’s event, Cliatt invited attendees onstage at the Neel Performing Arts Center to show their support for building Black businesses. As seats emptied, and the stage filled with people shaking hands and embracing, a Sam Cooke song, “A Change is Gonna Come,” filled the auditorium.

James A. Jones Jr. covers business news for the Bradenton Herald. Drafted into the Army in 1966, he served in the Vietnam War as a Signal officer. He is the author of “Oh, Darling!” Choices and Struggle in the Age of Sputnik, the Vietnam War and the New Millennium.”
Support my work with a digital subscription