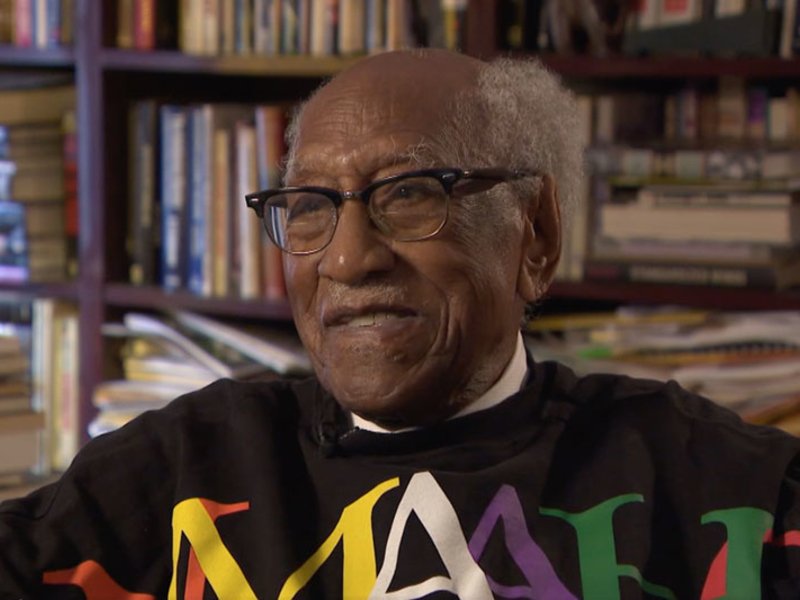 A social worker, labor organizer and a teacher, Black was a graduate of Roosevelt University with a master’s degree from the University of Chicago who taught at DuSable and other Chicago Public Schools, and was a professor and administrator at City Colleges of Chicago.

At the suggestion of Studs Terkel and others, he began compiling oral histories of Bronzeville residents who told the story of Chicago’s Black Belt. Just after his 100th birthday, his own oral history, “Sacred Ground: The Chicago Streets of Timuel Black,” was published by Northwestern University Press.

“To those who consider oral history ‘soft’ history, or somehow less valid,” he wrote, “I would say, it’s the people who are left out of history whose stories we are collecting and saving. I’m telling stories that I hope capture a feeling, a spirit of what this place and its people have meant, not just to me, but to our city and our country. . . .My story’s typical-ness is precisely where its value lies.”

Adam Green, a University of Chicago associate professor of American history and author of “Selling the Race: Culture, Community, and Black Chicago, 1940-1955,” describes Black as “the unique, singular, catalyzing figure” of the city’s civil rights movement, starting in the 1960s. “Tim walked and talked with virtually everybody of note who lived in Black Chicago or came through Black Chicago.”

Black was a few months old when he moved with his parents, a brother and a sister to Chicago in 1919 from Birmingham, Ala., where his father was a steelworker.

“Blacks like my father left the South at that time for four major reasons: to be able to fight back if they were attacked, get better jobs, to be able to vote and to get better education for their children,” he told the Chicago Defender in 1994, crediting the paper for its role in fomenting the Great Migration, with the help of railroad porters who surreptitiously distributed issues throughout the South.

After graduating from DuSable in 1937, he worked various jobs until he was drafted into the Army in 1943 during World War II. In Germany he viewed the liberated Buchenwald concentration camp. “The horror was indescribable,” Black told the Defender. “I kept thinking, this is what happened to my people during slavery.”

Black also was embittered by racism in the segregated Army.

“Tim had come home angry on a troopship,” says historian Christopher Robert Reed, and wasn’t interested in catching sight of the Statue of Liberty as the ship sailed into New York Harbor. “But after he did, he had a tear in his eye.”

Black’s civil rights work began in earnest in the 1960s. At the beginning of the decade he protested Chicago’s segregated beaches by helping organize a “wade in” at Rainbow Beach on the South Side. For the March on Washington for Jobs and Freedom, where King delivered his “I Have a Dream Speech,” he recruited Chicagoans to join the rally by rail. Later that year as a CPS teacher he demonstrated against the use of mobile classrooms—dubbed “Willis Wagons,” after the name of the superintendent—to relieve overcrowding in segregated Black classrooms. In 1966, Black assisted King’s Chicago Freedom Movement.

Black was less successful as a candidate for public office, defeated for 4th Ward alderman in 1963, state senator in 1978 and state representative in 1980, according to a 1994 article in the Hyde Park Citizen, which said he was a delegate to the Democratic National Convention in 1972, 1984 and 1988.

His failure to gain office had a silver lining, says Michael Bennett, a DePaul University associate professor of sociology who studied with Black.

“Without being an elected official, he could cover the waterfront,” Bennet said, spurring “the independent Black political movement in the broadest sense, not just the electoral sense.”

Harold Washington’s success “created the same kind of excitement at the local level that Barack Obama’s would generate on the national level two decades later,” Black said in “Sacred Ground,” according to a review in the Progressive magazine. “It taught so many younger people about the power of an awakened, organized community.”

Obama, according to Black, a backer of the Obama Presidential Center in Jackson Park, was “the beneficiary of the hopes and dreams of all kinds of Americans carried forward by those of my generation, struggling to achieve the impossible, but so often doubting that they can do it. He was not perfect, but he was historic.”