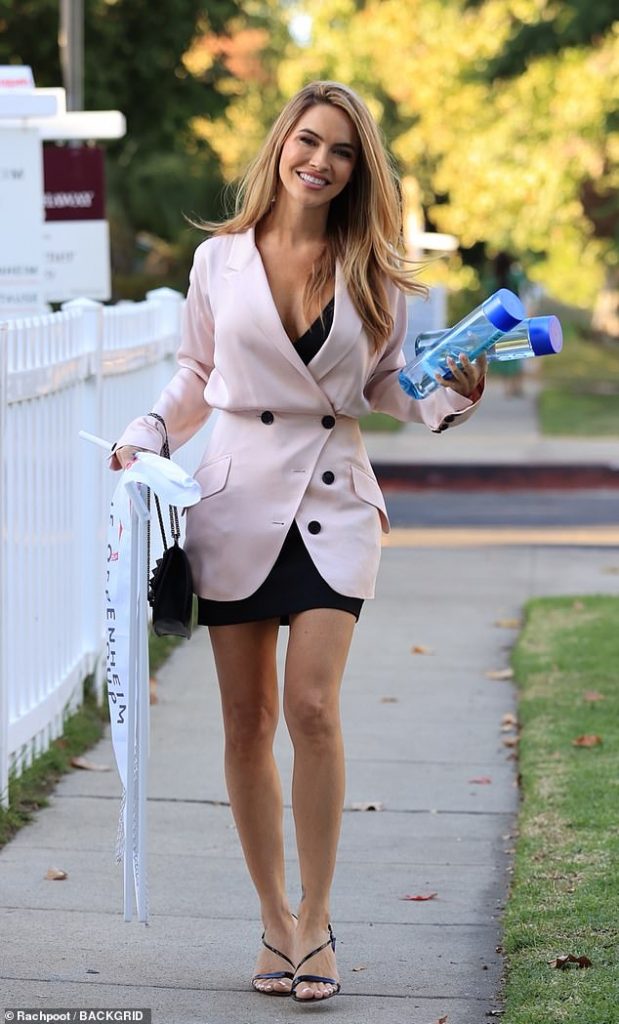 By Kevin Kayhart For Dailymail.com

Chrishell Stause may be one of the stars of the Netflix reality show Selling Sunset, but with that comes the hard work it takes, as a realtor, to show and sell a home.

And that even means working weekends, as was the case when the Kentucky-born beauty arrived at a property she selling in the Studio City neighborhood of Los Angeles on Sunday.

Dressed to impress, the reality star flashed an electric smile decked out in a black skirt, which came down to her mid-thigh, and a light pink blazer from Marissa Webb over a plunging black top that gave a hint of her cleavage. 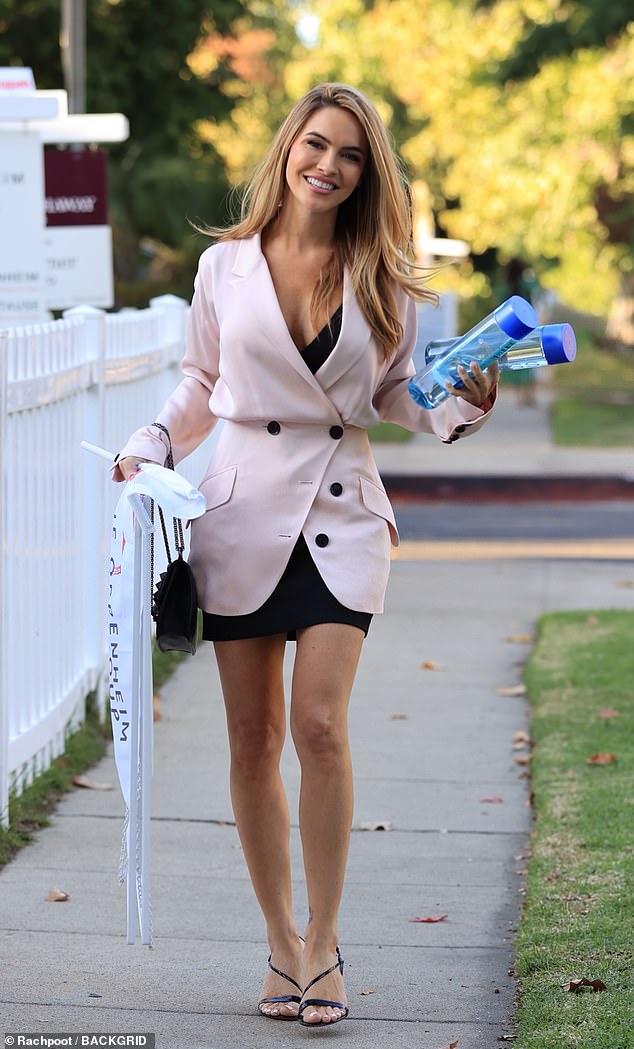 Open house: Chrishell Stause, 40, dressed to impress in a black skirt, a pink blazer from Marissa Webb, and strappy heels during an open house showing in the Studio City neighborhood of Los Angeles on Sunday

Stause, 40, made her grand arrival holding a couple of signs in one hand and a couple of water bottles in another.

In keeping with her stylish business theme in the fashion department, the reality star wore a pair of strappy black heels, and wore her lightened blonde tresses long and flowing with a part on the slight right.

The former soap opera actress made sure to bring some face masks along, due to the still lingering dangers of COVID-19.

Of course, as part of her selling point and charm, she also brought her upbeat and infectious personality and big glowing smile. 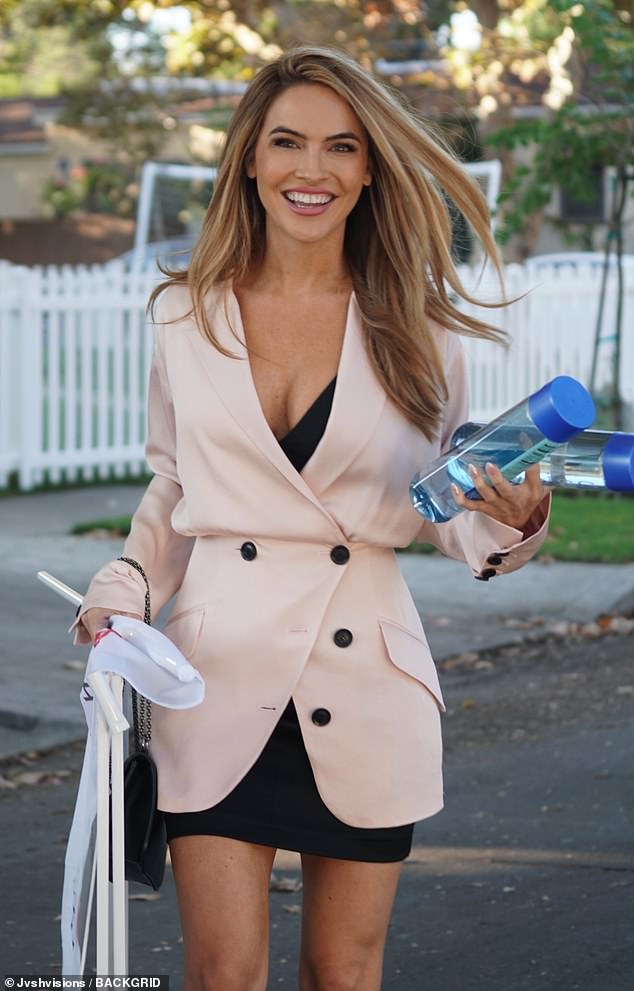 Working it: The realtor had her hands full when she arrived for the open house 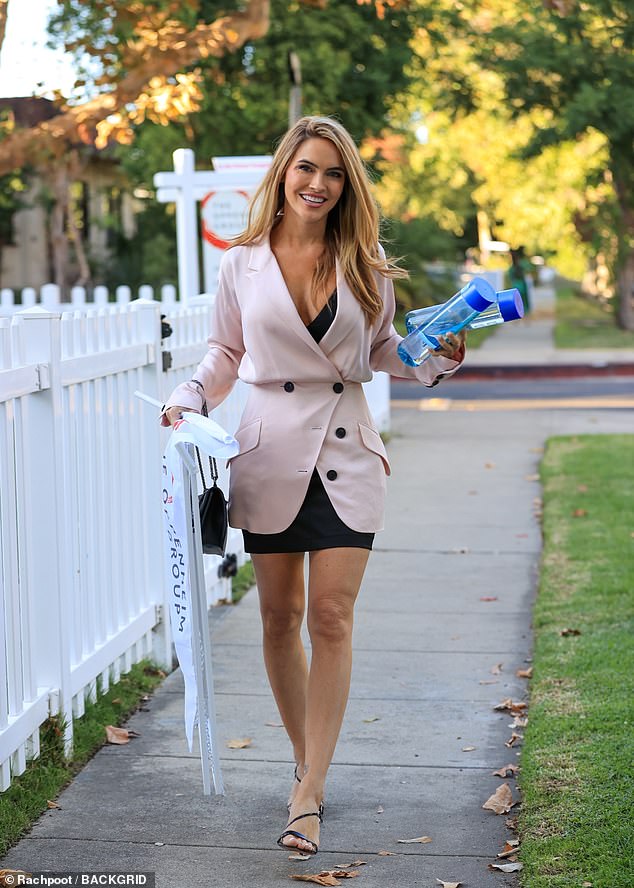 Double fisted: The Selling Sunset star was carrying a couple of signs and water bottles 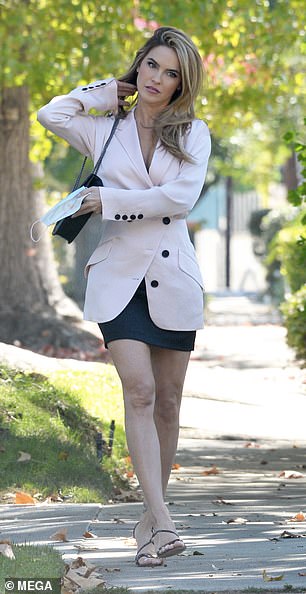 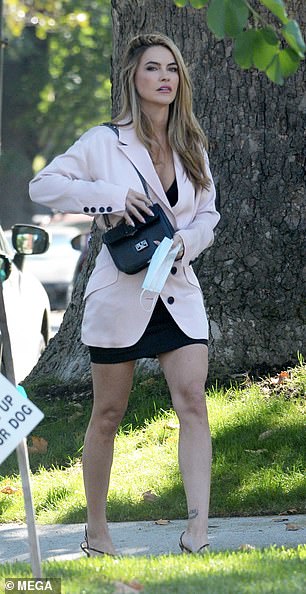 Safety first: The former soap opera actress also made sure to brining some face masks along, due to the still lingering dangers of COVID-19

Once inside the home, Stause snapped an array of videos and photos and posted them on her Instagram page.

She panned the property from inside the house to give a taste of what it looks like in one clip. There’s another video of showing how the back wall opens up to the backyard and pool.

Being that she’s a recognizable reality star, some people have taken to her social media platforms to ask her about the traffic flow at her open houses.

‘Yes sometimes people show up just to say hi,’ she confirmed in one post written over of photo of herself in her black and pink ensemble.

She added, ‘I loved meeting everyone today! And safety is always taken into account. I never sit open houses alone.’ 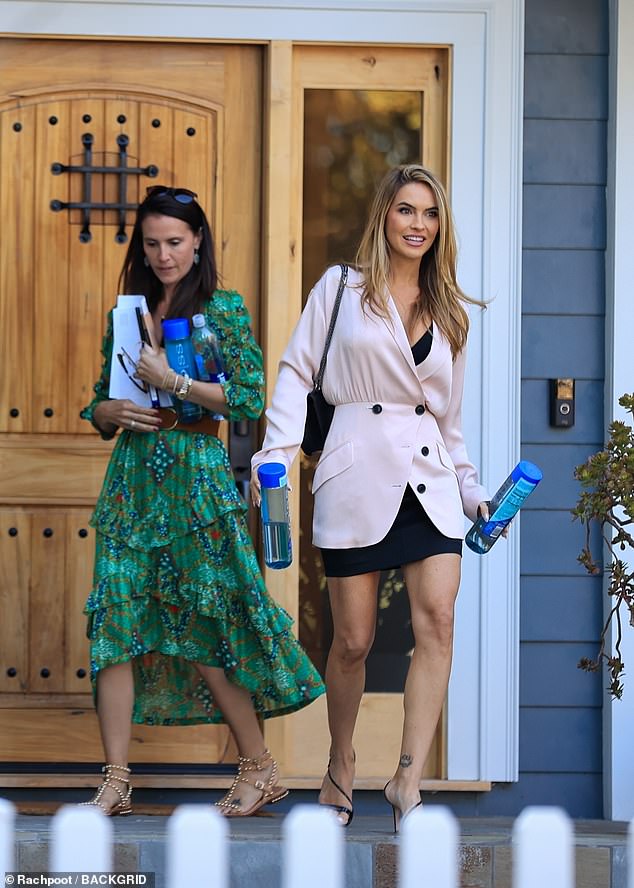 Glowing: Stause was all smiles when she headed out after the open house ended 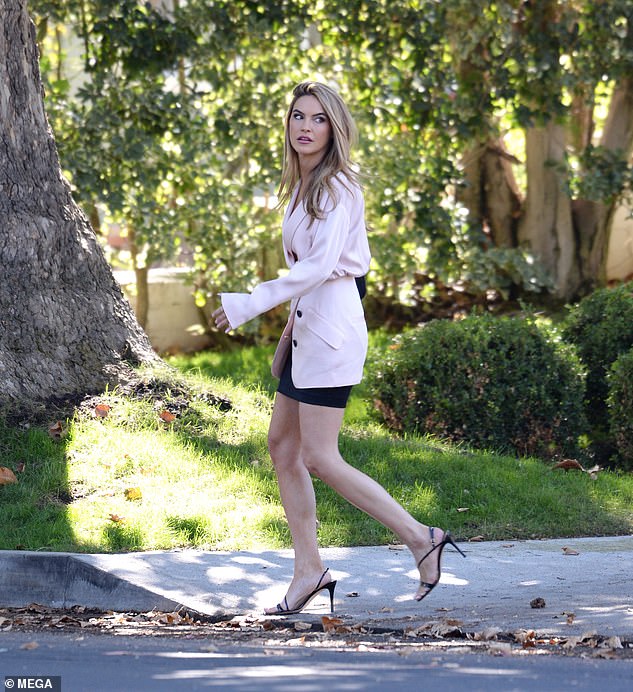 Home bound: The reality star put in some hours at the open house and then it was off to the office to catch up on paper work 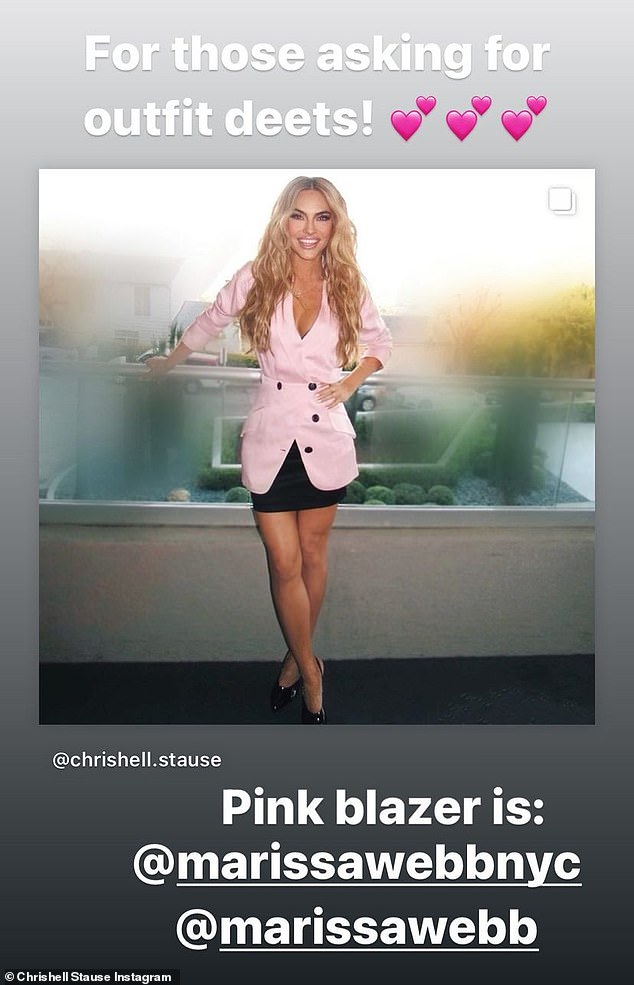 Plug: The Selling Sunset stat gave a plug to designer Marissa Webb for the pink blazer

The self-professed fan of the HBO comedy-drama series series, Succession, also shared a clip of herself opening up a gift package that part of the show’s promotional push.

She opened up the stylish box to reveal the various items that included a hat and a jacket, among other goodies.

Earlier on Sunday, before heading out to the open house, Stause slipped into promo mode for both the property and Succession: ‘Me headed to my open house knowing I am getting multiple offers and #succession is on tonight!! #itsavibe,’ she wrote in the caption of a photo of herself all glammed up.

But she then clarified by adding, ‘also not really me if you are actually stopping by today. I will be in regular clothes & having brushed my own hair. Ha! But this is what I imagine me being a Roy looks like. Throwback to an outtake of a photoshoot with @alexevansphotography #TB’ 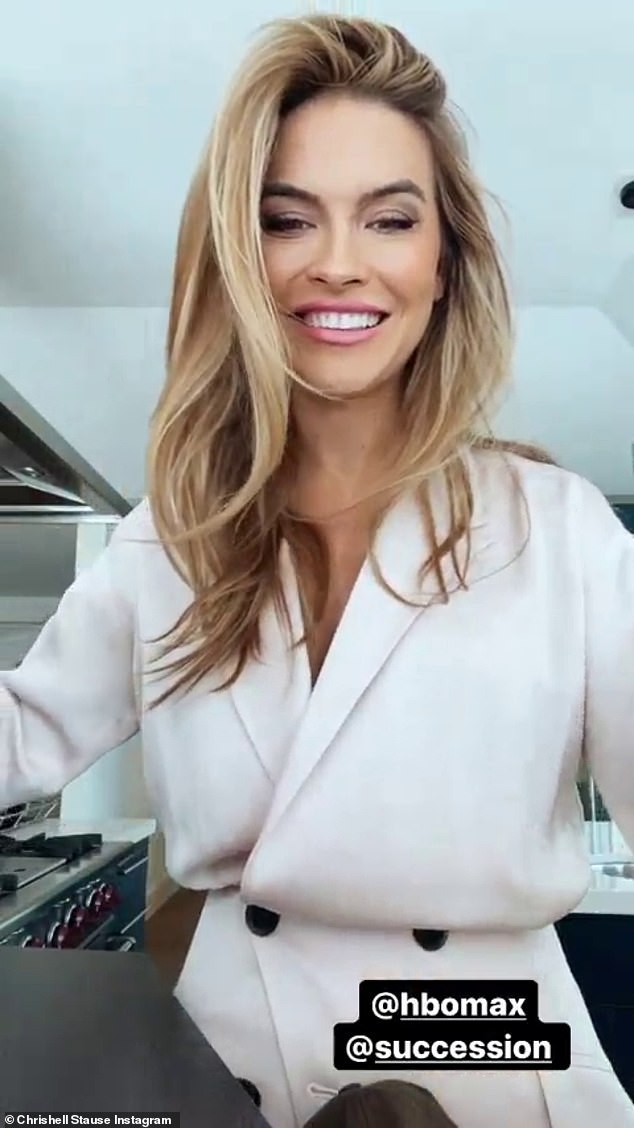 Promo mode: Stause revealed her love of the HBO comedy-drama series Succession and a gift package she received that part of the show’s promotion 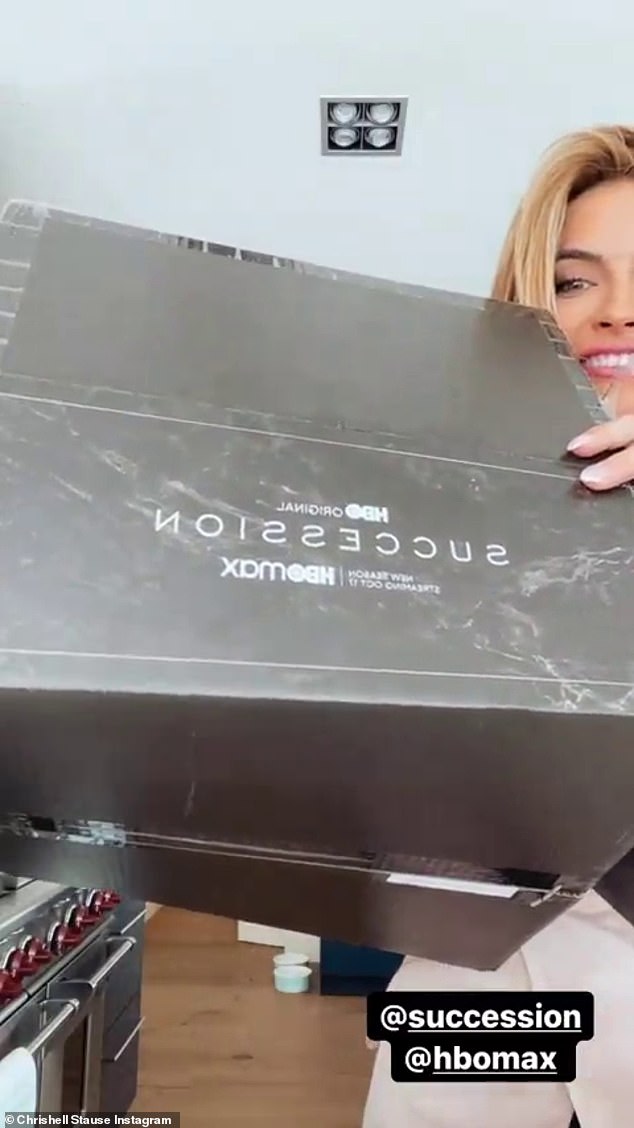 Promo gift: As part of the promotion of the show, the reality star received a gift package full of items that included a jacket and a hat 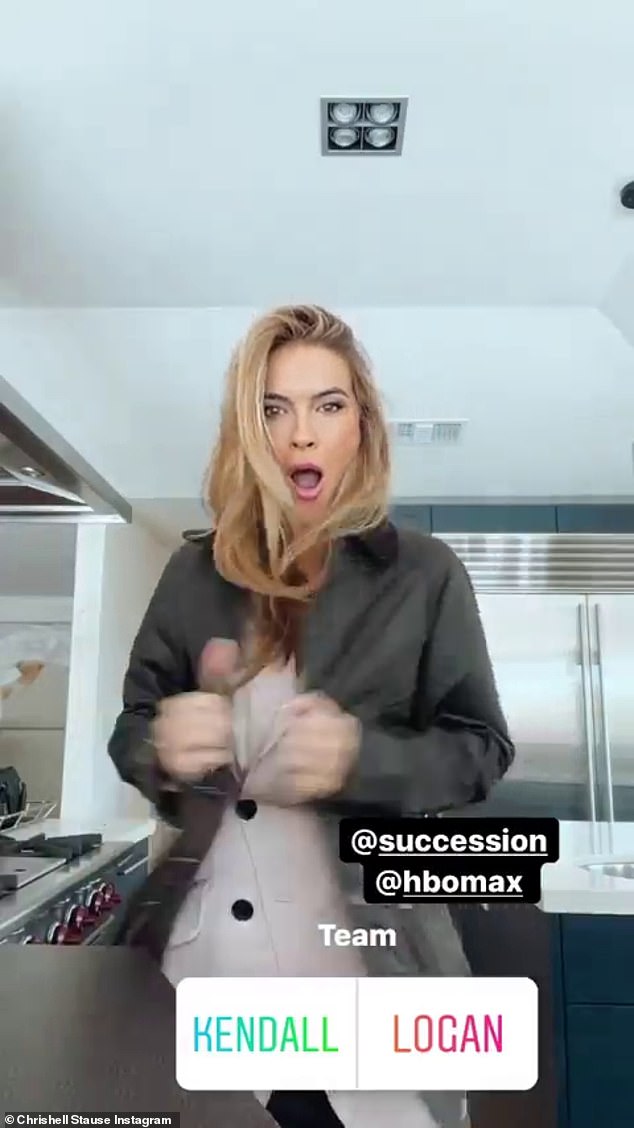 Happy times: Stause was giddy with excitement when she tried on the jacket