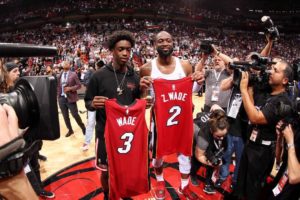 The legacy of future NBA Hall of Fame basketball player Dwyane Wade was solidified after having an illustrious playing career that saw him win three NBA championships with the Miami Heat. His sone Zaire Wade will extend that basketball legacy as it has been reported that he will be joining the NBA’s G League for this upcoming season.

According to NBA Insider for The Athletic and Stadium, Shams Charania, Wade’s son Zaire is expected to sign a contract with the NBA’s G League. He anticipates joining the Utah Jazz’s affiliate team, the Salt Lake City Stars.

Zaire Wade, the son of Dwyane Wade, is signing a contract in the NBA G League and is expected to join the Utah Jazz’s affiliate Salt Lake City Stars, sources tell @TheAthletic @Stadium. Dwyane Wade is a part-owner of the Jazz.

Earlier this year, Dwyane Wade became part owner of the Utah Jazz back in April.

“As a businessman, entrepreneur, and investor, I bring a lot to this partnership outside of my basketball experience,” Wade said. “I’m excited to help take the Utah Jazz to the next level.”

Before accusations of nepotism surface, it should be noted that 19-year-old Zaire has been making noise in the high school basketball scene ever since he became a member of Sierra Canyon High School, located in California. Zaire played alongside another future NBA Hall of Famer’s son, LeBron James Jr., referred to as Bronny.

According to The Spun, Zaire, a three-star combo guard, chose to attend Brewster Academy in New Hampshire for a post-grad year as he looked over whatever options he would have for pursuing a career playing basketball. Although the guard received several offers from a handful of college programs, he has decided to go the route of signing with the G-League to give himself the best chance to make an NBA team.