Everything That Michael Jackson Said About His Kids, Paris, Prince Michael and Blanket Jackson 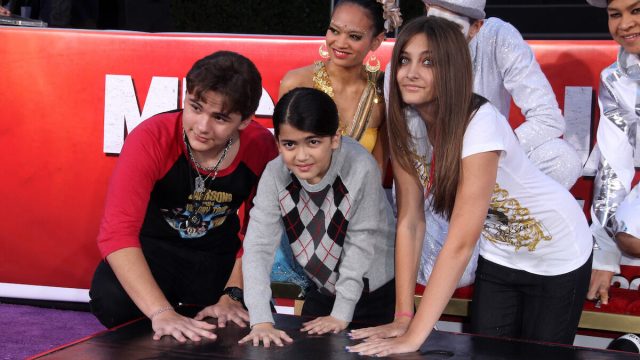 Michael Jackson made headlines throughout his life for his talents, his tumultuous scandals and his personal life, but over the years, one thing that held constant was being dad of his kids, Paris, Prince Michael and Blanket.

His only daughter, Paris, 18, opened up to Rolling Stone for the magazine’s cover story, giving a glimpse into what life was like growing up with the King of Pop. While she shockingly claimed her father was murdered and candidly discussed her sexual abuse, drug addiction and suicide attempts, the aspiring teen model and singer had nothing but praise for the late music icon. Paris — who also said she had nine tattoos in his honor — said that her father was a loving figure and “a kickass cook,” he always reminded her that she was black and he “cussed like a sailor.”

“He is my father,” she said in the interview. “He will always be my father. He never wasn’t, and he never will not be. … People that knew him really well say they see him in me, that it’s almost scary.”

Prince Michael, Blanket and Paris Jackson appear at the Michael Forever Tribute Concert in memory of the late Michael Jackson at the Millennium Stadium on Oct. 8, 2011, in Cardiff, Wales. Samir Hussein/WireImage

After her bombshell interview, here are some of the most memorable things that the “Thriller” singer said about his kids before his death in June 2009 at the age of 50.

He Felt “Blessed” When His First Child, Son Prince, Was Born

“Words can’t describe how I feel. … I have been blessed beyond comprehension and I will work tirelessly at being the best father that I can possibly be. I appreciate that my fans are elated, but I hope that everyone respects the privacy Debbie [Rowe] and I want and need for our son. I grew up in a fish bowl and will not allow the to happen to my child. Please respect our wishes and give my son his privacy.” (Press statement, February 1997)

“But now I am a father myself, and one day I was thinking about my own children, Prince and Paris, and how I wanted them to think of me when they grow up. To be sure, I would like them to remember how I always wanted them with me wherever I went, how I always tried to put them before everything else. But there are also challenges in their lives. Because my kids are stalked by paparazzi, they can’t always go to a park or a movie with me. So what if they grow older and resent me, and how my choices impacted their youth?” (Speech in Oxford, March 2001)

“[Fatherhood has changed me] in a huge way. You have to value your time differently, no doubt about it. It´s your responsibility to make sure they’re taken care of and raised properly with good manners. But I refuse to let any of it get in the way of the music or the dance or the performing. I have to play two different roles. I always wanted to have a big family, ever since I was in school. I was always telling my father I would outdo him. He had 10 children. I would love to have, like, 11 or 12 myself.” (USA Today interview, December 2001)

He Felt Very Protective of His Children When in Public

“I love and adore my children. They mean everything to me. When they’re in public, though, I conceal their faces, ’cause I want my children protected. At home, they have a normal life, they play with other kids and they have a good time, they’re laughing a lot. They run around, they even go to school. It’s a normal life for them. But in public, I must protect them. I love my children very much, and I’m proud to be their dad.” (TV special, 2003)

He Liked Being a Hands-on Dad Whenever He Was Able, Even Changing Diapers

“Well, I enjoy taking care of my children myself. It’s fun. It’s why I had them. So I could take care of them. It’s great relief for me. You know, it’s a pleasure. It keeps me happy and laughing. … They’re wonderful, sweet, innocent children. … They mean — it’s hard to put into words, because they mean everything, the same way you would explain how your children make you feel. I mean, they’re the world for me. I wake up and I’m ready for the day because of them. I give them breakfast, I change diapers. If they wanna read, we do a lot of reading. We play hide-and-seek, we play blindfold, and I have a wonderful time with them.” (Interview with Geraldo Rivera, February 2005)