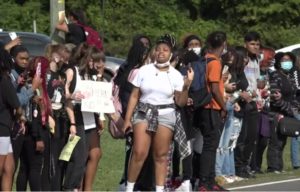 A group of female athletes at a Charlotte-area high school have been suspended after protesting their school’s decision to allow a football player to participate in a recent game after he had been charged with sexually assaulting another student.

On Friday, Oct. 1, Sereniti Simpson and other members of the girls’ varsity volleyball team at Olympic High School staged a walkout to call attention to the way their school handles reports of sexual misconduct, particularly for student athletes.

“We’re out here today because we’re not going to let them silence our voices anymore,” Simpson told local station WCNC at the time. “If you get your phone taken in class, you’re benched, but yet he can be under investigation for a sexual crime and still get to play on Friday, that is ridiculous.”

Brianna Moncada, a senior at the school, told the station that coaches covered the 15-year-old player’s ankle monitor before allowing him to take the stage.

Because of the ages of the students involved, neither Charlotte Mecklenburg Police Department or Charlotte Mecklenburg Schools could confirm the identity of the accused student, and thus could not confirm that he played in the game in question. CMPD did confirm that a 15-year-old male student at Olympic was arrested and charged with attempted second-degree rape, second-degree kidnapping, and sexual battery on Sept. 14, following an incident which had taken place the day before.

According to Simpson, however, the student body is fully aware of which player was arrested. “I’ve had girls tell me they don’t feel safe because they see him walking on their campus,” she stated. “And not just him. There are so many other boys that get to walk free. [School administators] need to actually take steps to make sure our girls feel safer on campus. They need to kick kids off campus who are charged with crimes.”

Instead, Charlotte Observer reports the two members of the girls’ volleyball team who spoke out were issued a one day suspension, for violating the school board’s policy on student protests. Officials stated that while a separate, planned indoor demonstration in the school’s gym Friday morning was authorized, the “disruptive” student walk-out was not.

“Other sports teams were represented in the protest — hundreds of students were protesting — but the volleyball team was on the front line,” one of the girls’ parents told the Observer under condition of anonymity. “If you can’t punish them all, you can’t punish any.”

Simpson, the other suspended student, turned in her jersey when her coach informed her of the suspension.

Both the state of North Carolina and Charlotte Mecklenburg Schools only require student athletes be suspended from their teams if they are found guilty of a crime. However, following the Oct. 1 protest, Erica Turner, the Athletic Director at Olympic, said that “any student-athlete that is arrested or charged with a criminal offense will not be allowed to participate while charges are pending.”