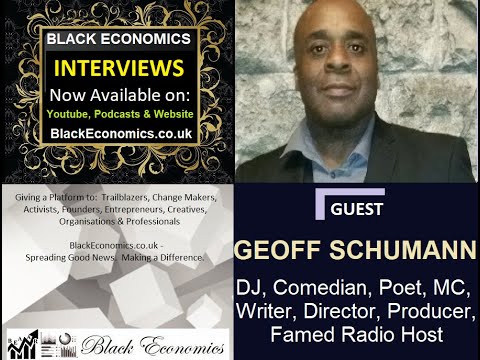 Geoff Schumann is known by many as one of the leading African Caribbean comedians in Britain.
In this interview we chat about his education, his teaching career, how he started on Choice FM, his top radio show, getting fired, inter-racial marriages, youth of today and his friend Felix Dexter.

The former comprehensive school teacher and qualified youth worker has smoothly moved from one public arena to another.

Geoff’s media career began on a community radio station in 1994. He then went onto to train at the BBC radio school based in the White City.

From August 1997 until March 2004 Geoff hosted the highly popular breakfast show on Choice FM. He also had the highest ever rated solo programme on the station on Saturday mornings. This was called ‘The Schumann Shuffle’. This was a mixture of both music and comedy whilst encompassing an hour-long topical phone-in discussion programme

We help to promote black-owned businesses and champion charitable causes.
We are a News and Media Outlet and Black Business Support organisation. We give a platform to entrepreneurs and trailblazers to share their stories, their talents, their products / services. This in turn helps to motivate and inspire others.

Donate to Support our Work
https://paypal.me/icobart​