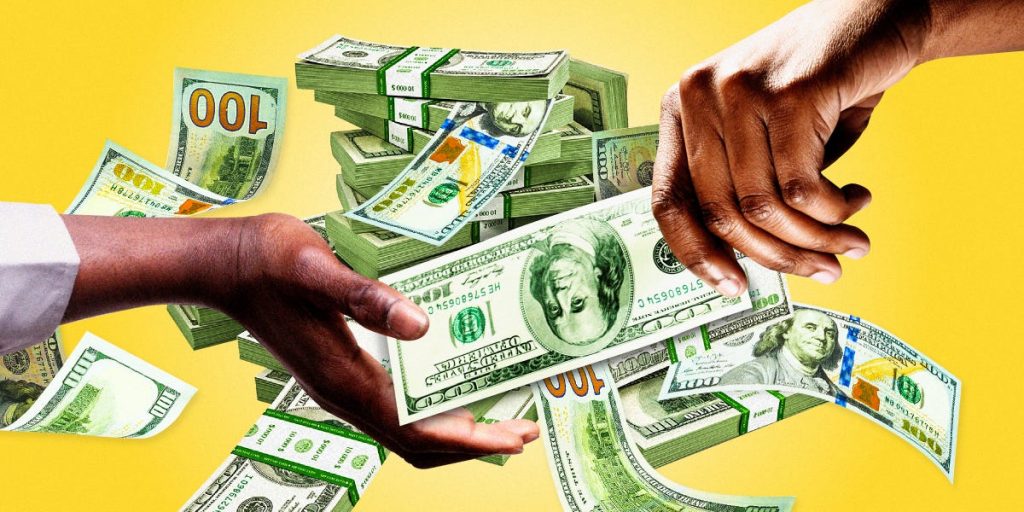 Qiana Patterson has worn many hats over the course of her career: middle-school teacher, education-tech executive, startup advisor.

But she never imagined that she’d add “angel” to the list of those titles, until an advisee approached her about participating in a funding round.

“Before then, I didn’t even know that I could do it,” Patterson said.

Two years later, Patterson, who lives in Los Angeles, has banded together with other Black women in tech across the US to exchange information on investment opportunities and coinvest in select deals.

Patterson is just one of a growing network of Black founders and tech operators making inroads to angel investing and venture capital. Like others — from solo venture capitalists to giant investment firms — they’re seeking to fund startups for a chance at the enormous riches made possible by such investments.

But many of them are also interested in smoothing the path for founders of color who find fewer doors open to them in the tech world. One key step, they say, is to provide much-needed early capital to those founders, whose experience and ambitions may be poorly understood by traditional Silicon Valley investors who don’t share their backgrounds.

Insider spoke with five Black angels about how they got into investing, the kind of returns they hoped to see for themselves, and how they were teaching others to do the same.

Unlike buying public stocks or real estate, these investors say their efforts are far more consequential than accumulating wealth for themselves.

Each success creates more capital that can be invested into more Black startups, which, in turn, creates more wealthy Black entrepreneurs who can then invest. This is the same cycle that turned Silicon Valley’s Sand Hill Road into the world headquarters for venture capital.

Instead of waiting for traditional venture sources to decide to include more Black founders, these angel investors are steadily building their own capital stream. And they’re doing it in cities across the US, from Los Angeles to Charlotte, North Carolina.

“Now, you see a lot more Black checkwriters,” said Jewel Burks Solomon, the US head of Google for Startups and a cofounder of the Atlanta venture-capital firm Collab Capital. “It’s still a long way to go when it comes to the amount of capital that we need to see being invested in Black-led companies, but I would say we are making some significant progress, which is pretty exciting.”

‘I need to learn how to do that’

The increasing number of Black startup executives (known in startup parlance as “operators”) who are becoming angel investors is in line with the rise of solo venture capitalists and the broadening popularity of angel investing among startup founders.

There’s also a growing awareness of the outsize returns that can come from investments in young private companies, rather than public markets — where startups can go from launch to billion-dollar valuations in a couple of years, sometimes in a couple of months.

Some Black startup employees and founders have sat at the periphery of those investment circles for years without even realizing it, DeVaris Brown, the data-infrastructure startup Meroxa’s cofounder and CEO, told Insider.

Brown, who was once a product manager at Zendesk, got into angel investing after he noticed that most of his colleagues at the help-desk-software company — who largely were not Black — were putting their money into startups.

“All these folks were putting five, 10 grand into all these companies and having all these crazy exits,” he said. “So I was like, ‘I need to learn how to do that.'”

Now, Brown, who works out of Oakland, California, focuses on investments in enterprise, data, artificial intelligence, and services for developers. He’s backed mostly founders of color, including Ryan Perry, a cofounder of the code-profiling startup Pyroscope, and Akintunde Maiyegun, a cofounder of Big Wolf Games.

Having often been one of the only Black faces in the room among enterprise-software founders and managers, Brown is particularly interested in giving other Black founders in the field a helping hand, he said. He sources deals in part through groups devoted to Black software engineers and product managers but sometimes browses GitHub to find interesting projects, he added.

“If we can give more opportunities to people who look like us,” he said, “it becomes a self-feeding cycle.”

Indeed, the path to angel investing opens up once founders themselves have a few rounds of funding under their belts, said Chris Bennett, the San Francisco founder of the childcare startup Wonderschool.

Once they do, he said, they may meet the criteria to become an “accredited investor,” or someone who’s eligible to invest in private companies under Securities and Exchange Commission rules. (That means making at least $200,000 a year or having at least $1 million in wealth outside one’s home. Certain finance professionals also qualify.)

Founders who reach that threshold often hear about investing opportunities, Bennett said, as other up-and-coming founders seek them out for advice. In time, they can gain early access to a slate of startups that are likely to succeed.

Until recently, that self-fueled cycle of investing success hasn’t included many Black founders.

But that’s starting to change.

While the percentage of venture capital going to Black founders is still minuscule — just 1.2% of the $137 billion invested in US startups in the first half of 2021, according to Crunchbase — the number of Black founders who have received substantial funding is ticking higher. Three Black-led startups, Cityblock Health, Calendly, and SmartAsset, have become unicorns in the past year, while another company, Compass, has gone public.

His own angel investing has already borne fruit in that regard: Among the founders Bennett has backed is Donnel Baird, the founder and CEO of the Brooklyn, New York, energy-tech startup BlocPower. Baird, whose company announced a $63 million Series A round of equity and debt funding earlier this year, has since begun making his own angel investments.

But that, in itself, holds a greater purpose for many of those investors: By amassing wealth through a wide variety of investments, several of them told Insider, they hope to wield broader influence across the tech landscape.

With the growing popularity of syndicates, rolling funds, and special-purpose vehicles, it’s gotten easier for individuals to pool their money together to back startups. A number of organizations, including Pipeline Angels and Blck VC, have programs to educate professionals of color about angel investing.

For Patterson, Blck VC’s training program, called the Black Venture Institute, opened up a world she scarcely knew about, despite having spent more than a decade as an executive and advisor at edtech startups.

“All of those things are done secretly,” she said, referring to startup investments. “And most Black women are not in these circles.”

So Patterson has sought to open up the deals she finds to other Black women. That led her to join an effort launched last year by the Latino entrepreneur Richie Serna, a cofounder and the CEO of the payments-software company Finix, to bring a more diverse set of investors into the funding rounds of fast-growing startups.

That effort, known as the Cap Table Coalition, has since brought together 191 investors from underrepresented backgrounds and invested $16 million into 13 companies.

Among those investors is Brooke Daniels, the director of global portfolio development at Salesforce Ventures. Like Patterson, Daniels, who lives in Charlotte, North Carolina, has more than a decade of experience as a tech operator and advisor. But she, too, found the world of investing opaque until last year, when she came across the Black Venture Institute.

She’s since shifted her career focus to venture capital. Previously an enterprise-accounts leader at MuleSoft, she joined Salesforce Ventures in January. She’s also since made her first two angel investments.

Daniels said she saw her work advising startup employees and founders, many of them of color, and investing in startups as two sides of the same coin.

“As we do the work, as we move up in the company, the more of us become accredited investors,” she said. “This is what it looks like to create generational wealth.”