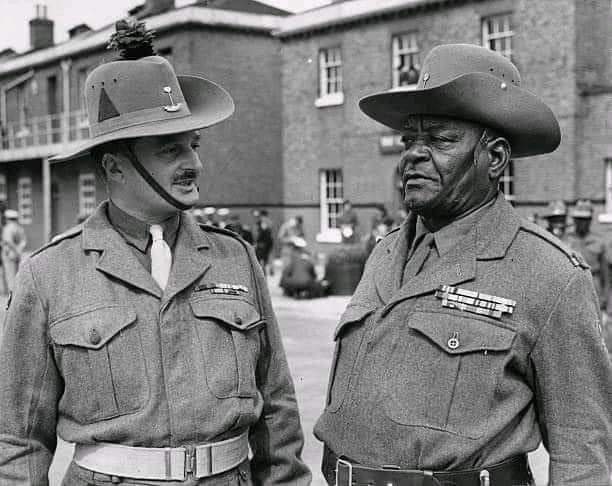 Late Capt. Kyari Magumeri From Borno was the first Nigerian to be promoted to the rank of CAPTAIN in the British Army (1953) After making a gallant performance in 1st and 2nd WW.

Born in 1897 in Borno, Nigeria, Chari Magumeri enlisted in a colonial unit of the Imperial German Army at the age of sixteen during The Great War and was awarded the Iron Cross 2nd Class for bravery in the field against the British in Northern Cameroon. The Germans promoted him to the rank of sergeant. When the British occupied part of that territory, Magumeri was inducted into the West African Frontier Force in 1917.

He served in 5th Bn The Nigerian Regiment, in which his father had served for twenty-six years, and has been described as distinguishing himself, which would have pleased his father, presuming the latter were still alive. One wonders what Chari Magumeri’s father would have thought of his son’s enlistment in the German army. In the photo (posted below because of dynamic page link problems), RSM Magumeri is wearing the ribands of the MM, BEM, BWM, VM, 1939-1945 Star, Africa Star, Burma Star, Defence Medal, War Medal with MID Oakleaf, 1937 Coronation Medal, and the Army LSGC Medal. He qualified for The Defence Medal during his time in India and Abyssinia.

One wonders if he still had his German documents and his 1914 EK2 or if these were confiscated from him in 1917 after the WWI. He would have had every right to wear the 1914 EK2 as a Civilian after he retired. He would also have been eligible for the 1934 “Hindenburg Cross”. One wonders if any former Askari applied to the Nazi government for their 1914-1918 “Ehrenkreuze”. By 1928, Magumeri was RSM of the 3rd Battalion The Nigerian Regiment. During WW2, RSM Magumeri won the MM in the 1940-1941 Abyssinian (Ethiopian) Campaign.

The regiment was later transferred to India with 81st West African Division, fighting in the Naga Hills and Burma with the 14th Army, where RSM Magumeri MM picked up a MID. He also received the BEM in 1944 for his long and excellent service. Returning to Nigeria after the war, RSM Magumeri MM BEM MID was involved in training duties and was promoted to Captain on retirement from the service in 1953.

His name remains revered in Nigeria amongst those Nigerians with a sense of pride in their nation and its history but until recently, there were no military establishments named after him, perhaps because his achievements pre-dated independence, his part in the shaping of a new generation of Nigerian soldiers aside. What an impressive-looking soldier Maigumeri was! An Army barracks has now been named after him in Lokoja.

The below photograph was snapped on the 21st May 1953, Royal Sergeant Major Chari Magumeri, a member of the Nigerian Regiment, with Lieutenant Colonel M M Davie, at Woolwich Barracks, London. The regiment is part of the colonial contingent which took part in a parade during the coronation of Queen Elizabeth II of Great Britain.

May His Gentle Soul Rest In Perfect Peace.