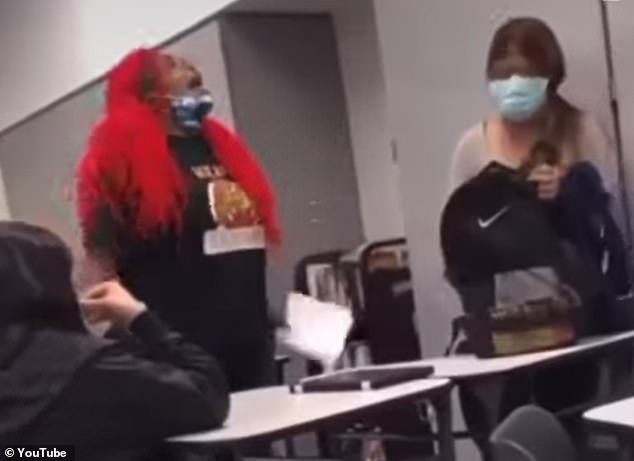 Amid a districtwide mask mandate, a middle school teacher in Alpine, Texas, was caught on film removing her face mask and exhaling on a student.

The video of the Sept. 17 incident—recorded at Mead Middle School in Houston—began circulating the web on Monday, Daily Mail reported. In the clips, the teacher is seen intentionally breathing on the student while her mask is pulled down. She’s heard telling the student, who’s huddled against a wall, “shut up” and “first of all, don’t get it twisted.”

The masked student held her hand up in an attempt to block the teacher from coming closer. The teacher proceeded to tell the young woman, “I don’t care. I don’t care,” while deliberately exhaling on her.

“Get out of my face,” the student said.

“Make me,” the teacher replied.

The student told the teacher, “that’s why your breath smells,” before asking, “you want me to leave your class or not” twice.

The teacher responded, “No, actually sit back down” while slapping a desk. “Sit back down,” she said.

Grizzy’s Hood News Exclusive posted the video on its Facebook page with a caption that claims a relative of the student said the school initially told them nothing happened. The family then saw the video surface on social media. According to the post, the unnamed relative also said the teacher was suspended with pay.

“After being notified of the incident, the teacher was removed from the classroom and an investigation was conducted,” the spokeswoman said. “The investigation has concluded and the district will take appropriate administrative action.”

According to The Texas Tribune, Texas public schools have reported more COVID-19 cases this school year than the entire 2020-2021 academic year.

Aldine Independent School District started classes on Aug. 16. According to Daily Mail, there were 19,244 newly reported cases among all Texas public school students by the end of the week.

The district policy requires students, staff, and visitors to wear masks in all buses, schools, and buildings. The district does not have a vaccine requirement.

In August, a Travis County judge approved a temporary restraining order against Gov. Greg Abbott’s prohibition on mask mandates in Texas schools, allowing the district to enforce mask mandates on their grounds.

“We know that school is the safest place for our students and staff,” Superintendent Dr. LaTonya M. Goffney said on the school’s website. “We learned a lot last year, and we did an incredible job of keeping our campuses safe. If you remember, we said that we would prioritize safety while never sacrificing learning. We will continue to do that.”