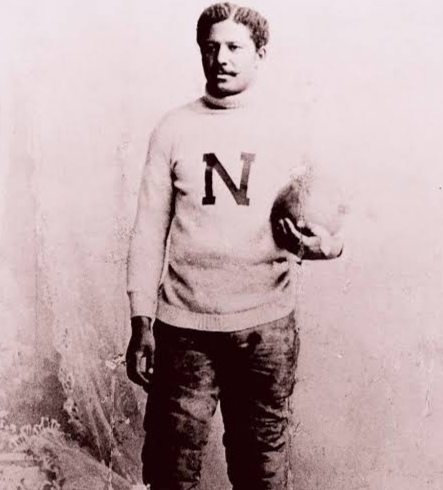 It’s hard to imagine, but there are those who don’t know George Flippin.

A towering 6-foot-2, 200 pounds, the University of Nebraska’s first black athlete and first true football star endured racism by opposing teams in the early 1890s. The fact that he was black led Missouri to forfeit against Nebraska in 1892 because the Tigers refused to play against him. But his team embraced and respected him, eventually voting him captain, a decision opposed by the team’s coach.

The son of a Henderson doctor, Flippin later earned a medical degree and opened the first hospital in Stromsburg, where he mended sick and injured patients for many years before his death in 1929.

It’s hard to imagine, but there are those who don’t know George Flippin.

Jon Humiston wants to change that.

After enlisting the help of Professor Aaron Holz’s advanced painting class, they divided a black-and-white photo of Flippin into 24 equal-sized squares, then asked each of the 12 students to paint two of them. No other creative instruction was given, so students could interpret and paint their slices in whatever manner they chose.

The university unveiled the finished 4-by-6-foot mural Friday night at the Gaughan Multicultural Center. The mural features Flippin standing proudly in his Nebraska football uniform — a white sweater emblazoned with a red N.

Student artist Crystal M. Sanders painted a square that included half of Flippin’s face and another in the mural’s bottom left corner. She said she painted the background of the facial square green to resemble a football field. She said the eclectic styles incorporated in the mural reflect the many facets of Flippin’s life.

“I think it came together very well, and I think it really resembled who George Flippin was,” she said. “He had so many attributes to himself once you got to know him.”

She said she was inspired by his story and hopes others will be, too.

“I just think he was courageous to go through what he went through,” she said.

After completing medical school in three years, Flippin practiced medicine in Illinois and Arkansas before returning to Nebraska to establish a hospital in Stromsburg in 1907.

A world traveler, Flippin often studied advances in Europe and brought them back to his well-respected practice in Nebraska. When he died in 1929, his funeral was said to be the largest Stromsburg had ever seen.

“Always have a goal and strive and don’t let people say that you can’t,” Humiston said. “He just simply did the right thing.”