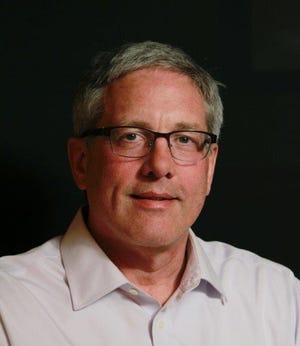 Albertus Van Raalte helped organize loans, but Nathan Kenyon established Holland’s first bank. The year was 1856. The bank was in the parlor of Aldred Plugger’s house at 5 E. Eighth St. — where the Warm Friend/Resthaven is today.

There, Kenyon operated his “exchange” bank, a place where customers could cash notes drawn on other banks across the country at rates based on the financial solvency of each issuing bank. This enabled customers to better engage in interstate and intrastate banking.

Plugger, who owned and operated a shipping business, a flour mill, a saw mill and a grocery store, might have been the bank’s biggest customer.

Kenyon’s bank and Plugger’s house were destroyed by the Great Holland Fire of 1871. Kenyon then built a three-story opera house called Kenyon Hall at 194 River Ave. on the southwest corner of River Avenue and Eighth Street — where Reader’s World is today.

In 1877, fire destroyed Kenyon Hall. Kenyan then partnered was Jacob Van Putten. Van Putten was born in The Netherlands in 1820.

Van Putten was a lumberman. He got his start when he purchased present day Waukazoo Woods from the Odawa (Ottawa) and lumbered the trees at his mill near Maple Avenue and Eighth Street.

Kenyan and Van Putten opened their bank in 1878 at 30 W. Eighth St. — where Fris Supply Shop is today. Van Putten’s son, Marinus, said to have been blinded by too much swimming in Black Lake, served as teller and became famous for his ability to tell the denomination of coins and never be mistaken.

Then Kenyon sold out to Van Putten and moved to Ionia, where he opened a hardware store. The bank was renamed the Holland City Bank.

First State Bank was located at 54 E. Eighth St. at the southeast corner of Central Avenue and Eighth Street. It was an impressive three-story structure.

Notice that Cappon, Diekema, Post and Verschure now had financial interests in both of Holland’s banks.

In 1892, Holland City State Bank began construction of the landmark Tower Clock building — the clock was built by John Raven, a 26-year-old jeweler, so “men wouldn’t be late for work.”

In 1915, First State Bank built the impressive structure at 1 W. Eighth St. on the northwest corner of Central Avenue and Eighth Street. That building still stands.

Diekema and Kollen (and TenCate) moved their law office upstairs, while F.W. Woolworth moved into the first floor and Holland Business College into the second floor in the vacated building at 54 E. Eighth Street.

In 1936, during the Great Depression, both the Holland City State Bank and First State Bank lost nearly one-half of their deposits and merged. The new bank was located at 1 W. Eighth St. and called the Holland State Bank.

In 1937, Ottawa County Building and Loan, formed by unrecognized citizens but later controlled by some of the same business elite, moved into the Tower Clock building.

The Holland State Bank became the First National Bank in 1946, which was purchased by First of America Bank in 1973.

First of America was then acquired by National City Bank in the late 1990s. PNC Bank acquired National City in 2008. In 2017, PNC Bank vacated the First State Bank Building at 1 W. Eighth St.

The First National Bank of Michigan moved into the building 2018.

Information for this article comes from Robert Swierenga, Randy VandeWater and Matt Kironovic, who did research with me several years ago, as well as The Holland City News.

— Community Columnist Steve VanderVeen is a business professor at Hope College. Contact him at vanderveen@hope.edu.