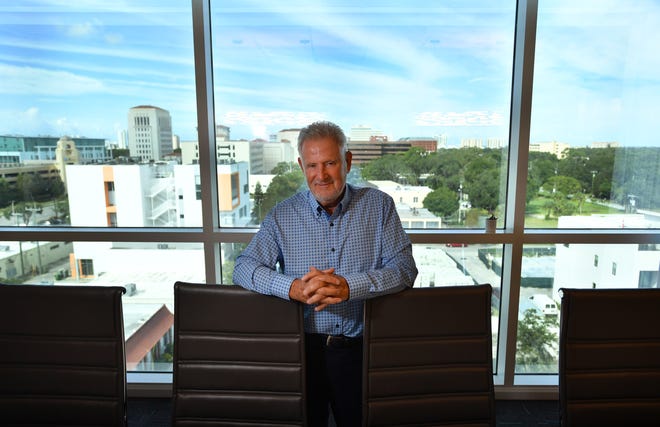 As Ian Black sat in his office in a suburb of Belfast, Northern Ireland, in the early 1980s, he knew he was in trouble.

Black said there may have been a warning phone call, but he doesn’t remember.

But what he will never forget is an older, maroon car pulling up to his real estate office.

“A guy stops the car, gets out and runs like hell,” Black said.

In Northern Ireland it was against the law to leave a car unattended in commercial areas or locations termed Control Zones. Black anticipated an explosion, so he cleared his office.

“I get home and hear a massive explosion,” he said. “The phone rings. The police. ‘Mr. Black you need to come down.’ The office was leveled.”

He had already been thinking about leaving behind The Troubles in his home country. For years, his home had been devastated by constant conflict between Protestants and Catholics in a civil war that would stretch on into the late 1990s.

The bombing of his office provided the final push for him to leave.

Ultimately, Northern Ireland’s loss has been this stretch of the gulf coast’s gain.

During his time in Sarasota, Black has provided expert advice on properties all across the region to buyers and sellers, served on advisory boards to local government and volunteered his time in local business and philanthropic organizations.

Howard Davis, a client and friend of Black’s, called Black “a true embodiment of the American success story.”

Davis recently sold the BOTA Center at 1570 Boulevard of the Arts in the Rosemary District using Black as his broker.

One thing that Davis said sets a good real estate broker apart is the ability to listen to the client.

On this transaction, Davis took a former Baker’s Badcock furniture store showroom built more than 60 years ago that had sat vacant for more than a decade and invested significant capital to turn it into an award-winning office property.

Black had located two Miami investment companies as potential buyers. They ran the numbers on the fully leased 17,000-square-foot building, and came in with an offer based largely on income that could be generated from leasing the office space.

Davis couldn’t accept either of those offers.

“I told Ian that the person who bought this property is going to have to love the building,” he said. “Not just somebody that’s crunching the numbers.”

In a relatively short period of time after the first offers came in, Black called back.

The property sold for $4.35 million a short time later in June of this year.

“Anybody can hang a sign and take calls,” Davis said. “It takes a different kind of person to listen.”

Black’s grandfather, a Jewish immigrant from Poland, moved to Belfast.

When his grandfather moved to Northern Ireland he did not speak English, but eventually opened a store, Black said.

Ultimately, his father, a businessman, would grow the family business into a successful furniture store.

He said that life in Belfast before 1969 was idyllic. Jews freely mixed with Catholics and Protestants. He says he had a good childhood.

Black didn’t always want to be in real estate.

He said he originally thought he would be a dentist, but after failing an entrance exam to the University of London — something that surprised Black as he thought he had a strong academic background — he spent a year working in his father’s business.

During that year, his father was selling a property with the Brian Morton & Co. real estate company and encouraged Black to see if real estate might be for him.

Black remembers going into the real estate company’s office and being captivated by what he saw.

He started there in mid-1960s, and was paid three pounds a week.

By 1972, the principal of the company had decided he wanted to retire. Black, now in his mid-20s, was one of six who pooled about 150,000 pounds to purchase the company.

At that time in Belfast, Black said, a paramilitary group had seized a power station and power was rationed. Streets were often blockaded and bombings were common.

Still, he thought buying the company was a good opportunity.

“We were young,” he said. “When you’re young it’s a different story… The next 10 years were the formative years of my real estate career.”

Black helped build Brian Morton & Co. from two offices in 1972 to 22 offices when he decided to move to the Sarasota area in 1982.

He said his group introduced several techniques that have through the years become common practice in real estate businesses, including being an early adopter using computers to track transactions.

Black said he considered relocating to Florida after seeing an advertisement in the Belfast Telegram. He first visited California, then the east coast of Florida. Neither seemed like a good fit.

His brother, who had already relocated to Toronto, Canada, vacationed on Longboat Key.

Black got in contact with a local agent and Sarasota just felt right.

In 1982, Sarasota was less developed than the eastern coast of Florida and Black liked that you could get to “green fields” with a short drive.

He also struck up a friendship with David Nash, another immigrant from the United Kingdom.

Nash was then working for development company Taylor Woodrow, which would later develop The Meadows near in Sarasota County.

“It’s one of those friendships where you might not see each other for three or four months, but when you do, you pick up right where you left off,” Nash said.

Nash said he and Black worked on several different projects through the years.

Black has a relaxed approach to transactions, but he can be intense when needed. But one of his most valuable assets is his honesty, Nash said.

“If it doesn’t make sense, he will tell you,” he said.

Marci Marsh, a partner at Ian Black Real Estate, worked with Black before they broke off and started the commercial real estate firm in 2003.

Marsh handles the property management portion of the company. Back then the company managed less than 50,000 square feet of commercial real estate. Today, she said, the firm manages 1.3 million square feet.

Black and Marsh started in a small office just off 10th Street near downtown. They were the only two employees at the company. She said the company has seen “steady growth.”

The commercial brokerage has about 120 active listings, according to the company’s website. There are about 15 sales agents and just under 10 full-time employees now.

“I saw so many people coming in from other parts of the U.S. and think that they could do it better than people here could do it,” he said. “I wanted to make sure I had a firm understanding of the area.”

Black said the time was right in 2003 to “hang his own shingle” in Sarasota.

“There’s no substitute for time. You have to keep your head down and do what you’re good at and eventually people will call you.”