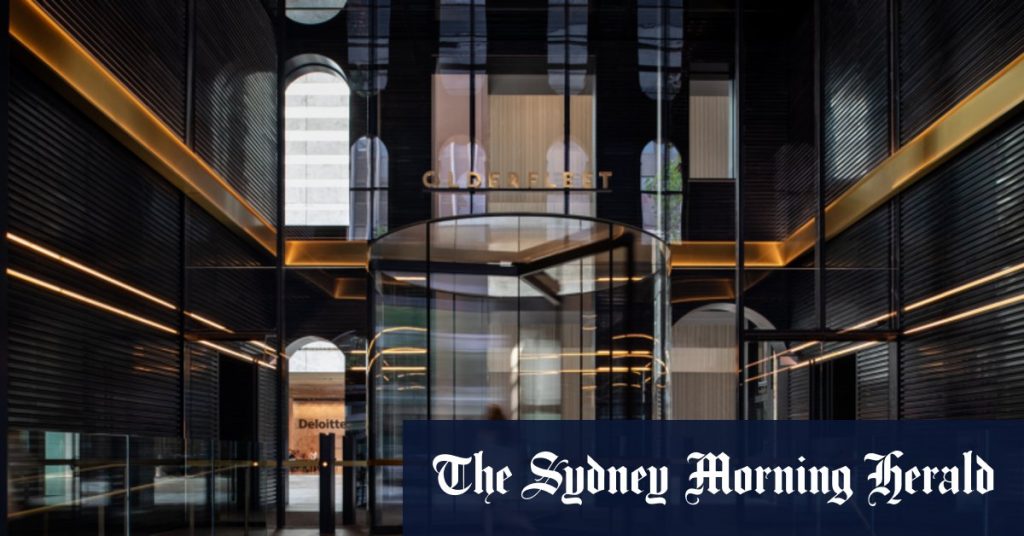 Akin to entering a luxury hotel, the vestibule is black, reflective and moody, a contrast to the heritage facade.

Says interior designer Rebecca Trenorden, associate director at Carr: “We were conscious of the buildings’ heritage qualities from the outset.”

Instead of using different striations of bricks or concrete as featured in the facade, there’s a line of reflective brass, backlit with lighting to emphasise the distinctive datum lines on the period facade.

“It’s quite a dark and compressed space, deliberately so, to allow for that sudden release into the main foyer,” says Trenorden, pointing out the 30 metre high atrium, through which skylights bring natural light into the core.

Carr also used other reflective materials to accentuate these spaces, including the black steel battens that frame the lift core.

In contrast to the vestibule, the atrium is relatively pale in its expression of materials.

Stone floors and walls feature extensively, as do reflective bands of brass set into a suspended stone form.

And while not obvious, this is the multi-level carpark that frames one part of the atrium.

On the other side are new black steel stairs that finely touch what’s left of the original structure (rooms of about five metres in width).

Says Trenorden: “We replaced a number of the apertures in the original interior brick wall with steel.

“The various openings, whether used for doors or windows, trace the use of the spaces.”

The reception area was also given a light touch with a bronze-mirrored freestanding pod that greets staff and visitors.

A large pendant art installation titled Solar by Wolfgang Buttress further lightens the experience. The spikes of the piece are fitted with LED lights that allow it to change colour during the day.

Says Trenorden: “We wanted to create something that was light in feel, but also one that came with a sense of monumentality.″⁣

The impressive stone staircase, with its stone treads and its balustrades that appear as though carved from the one piece of stone, is slightly reminiscent of the grand staircase at the Berlin Museum, designed by architect David Chipperfield.

This staircase leads to a lounge and bar area.

However, there’s also now a cafe located at ground level for staff to catch up on a more informal basis.

Those now slowly returning to work after COVID-19 will be excited to see how the past has been carefully acknowledged.

Says Trenorden: “It’s exciting to move back to a new office fit-out, but the point of arrival, be it an office or a lobby, creates a certain dynamism, a sense of celebration.

“It’s like a moment in time that people can reflect on.″⁣

The Business Briefing newsletter delivers major stories, exclusive coverage and expert opinion. Sign up to get it every weekday morning.