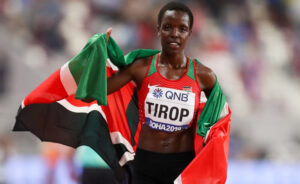 An Olympic distance runner had been discovered stabbed to death in her own home after she was reported missing by her father. Her husband has been declared a suspect in her killing.

According to a Twitter post by Athletics Kenya, Agnes Tirop, who was a two-time World Athletics Championship bronze medalist who recently competed in the recent Tokyo Olympics, has been found dead.

“Athletics Kenya are this afternoon distraught to learn about the untimely death of World 10,000m bronze medalist Agnes Tirop. Tirop was found dead at their home in Iten after she was allegedly stabbed by her husband. We are still working to unearth more details surrounding her demise.”

BBC has reported that the two-time World Athletics Championships bronze medalist, who finished in fourth place in the Olympic 5,000m final just two months ago, was only 25 years of age. Just last month, Tirop set a new world record time of 30:01 when she won at the Road to Records event hosted in Herzogenaurach, Germany.

Tirop was found stabbed to death in her home in Iten, a town in the Republic of Kenya after her father reported her missing Tuesday night. Her husband has been named a suspect as a criminal investigation has been started.

“When [police] got in the house, they found Tirop on the bed and there was a pool of blood on the floor,” Tom Makori, the head of the local police department stated. “They saw she had been stabbed in the neck, which led us to believe it was a knife wound, and we believe that is what caused her death. Her husband is still at large, and preliminary investigations tell us her husband is a suspect because he cannot be found. Police are trying to find her husband so he can explain what happened to Tirop.”

According to People, this past summer, Tirop competed in the Tokyo Olympics and came in fourth place in the women’s 5,000m race with a recorded time of 14:39:62, just three minutes behind first place Sifan Hassan of the Netherlands.