Prince Alemayehu of Ethiopia (“abducted /stolen /taken by Britain) with his guardian Speedy, 1868 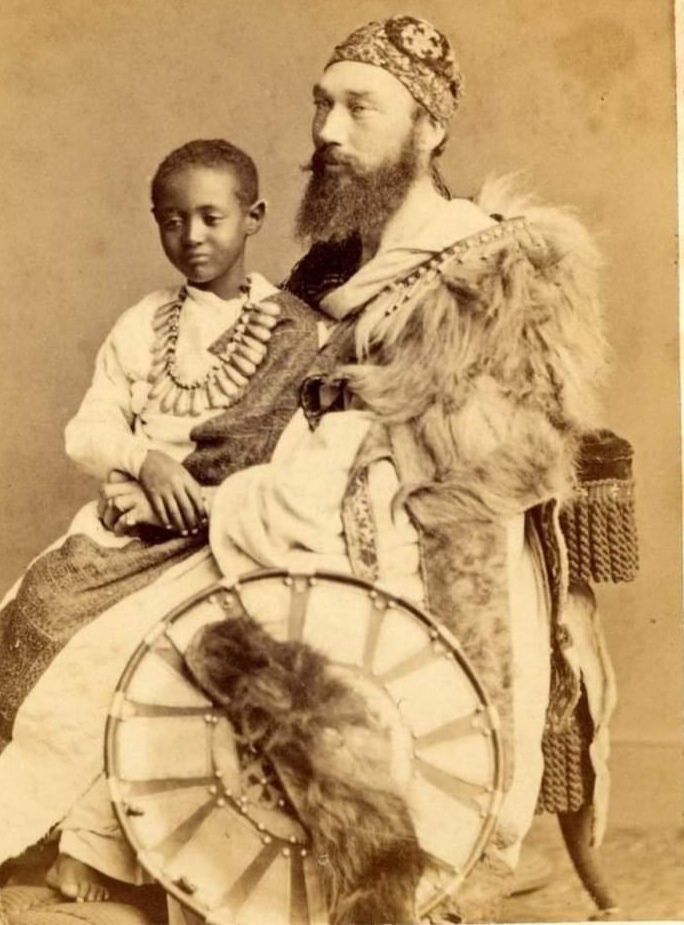 For 150 years, Ethiopians have been asking when Prince Alemayehu will come home. The orphan prince, a descendant of Solomon, was taken to England – some say “stolen” – after British soldiers looted his father’s imperial citadel following the Battle of Maqdala in 1868.

He died at the age of 18, after an unhappy childhood, and was buried at St George’s Chapel at Windsor Castle at the request of Queen Victoria. Discussions have take place with the Victoria & Albert Museum about the return of royal treasures taken by British forces during the battle, the Ethiopian government said it is making efforts to finally bring back the prince’s remains.
The campaign to return Alemayehu began in 2006, when the Ethiopian president wrote to the Queen asking for the remains to be exhumed, but the request was rebuffed. According to the Ethiopian embassy, the Lord Chamberlain replied on behalf of the Queen, saying that “while Her Majesty was in favour of repatriation […] identifying the remains of young Prince Alemayehu would not be possible.” The prince’s remains had been added to a grave at St George’s Chapel with nine others.

After the sacking of Maqdala, a British officer named Tristram Speedy took the prince and his mother, the Empress Tiruwork, to Britain. The empress died on the way and before the party was due to embark on a ship from Alexandria in Egypt, the officer ordered all the other Ethiopians to return.

Speedy took Alemayehu to his home in the Isle of Wight, where he was presented to Queen Victoria. Speedy was paid a stipend for the education of the prince, who went to Rugby school then Sandhurst.

At school he suffered racism, He had to sleep on the floor at one point.

He was taken away from all of his family and told he had to build a relationship with this man, who was one of those responsible for his father’s death.

Ethiopians revere Prince Alemayehu as a young prisoner of war – he was only seven years old when taken hostage, Prince Alemayehu remains the son of a hero, who chose to end his own life, rather than surrender to foreign soldiers. Ethiopians view the Prince with the same level of affection and respect.

Addis Ababa is also stepping up pressure for the return of objects taken after the Battle of Maqdala, which include a gold crown with intricate filigree work, a royal wedding dress and hundreds of illuminated manuscripts, including six which are kept in the Queen’s personal library at Windsor.