R. Kelly Found Guilty Of All Charges in Sex Trafficking and Racketeering Trial 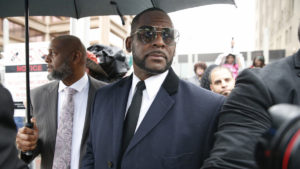 On Monday, R. Kelly was found guilty on all nine counts in his sex trafficking and racketeering trial, the U.S. attorney’s office for the Eastern District of New York announced.

Kelly now faces more than 30 years in prison for allegations that he raped, abused, and physically assaulted women and minors.

Among Kelly’s many charges include knowingly infecting some of his accusers with a sexually transmitted disease. He was also accused of bribery, kidnapping, forced labor, and producing child pornography.

Kelly, whose full name is Robert Sylvester Kelly, pleaded not guilty to one count of racketeering and eight counts of illegally transporting people across state lines for prostitution.

“Prosecutors have tried to portray him as an intemperate predator who exploited his fame to attract fans into his circle, where he would demand strict obedience or else punish them,” Reuters observed.

Kelly has repeatedly denied sexual abuse accusations, which have defined him as much as his abilities as a hitmaker.

On the heels of R. Kelly’s sex trafficking trial coming to an end, the disgraced singer has seen a drastic drop in his reported net worth and assets.

According to Celebrity Net Worth, Kelly’s fall from grace has resulted in his listed earnings and assets taking a dip to -$2 million. While Kelly’s peak net worth was at one time cited as being as high as $100 million, it was his April 2020 appearance before a judge where the “I Believe I Can Fly” singer claimed he owed $1.9 million to the IRS.

That’s not to mention all the legal fees Kelly has accrued over the years fighting cases. Among his financial losses include the tens of millions Kelly allegedly paid to settle dozens of sexual assault lawsuits made by women who claimed to have been abused by the singer.

Kelly also lost a chunk of his net worth after divorcing his ex-wife Andrea Kelly, whom he was married to from 1996 to 2009. In 2012, it was reported that Kelly owed $5 million in unpaid taxes dating back to 2005. In 2013, Kelly lost his Chicago home to foreclosure for failing to pay the mortgage since 2010.

In 2018, the self-proclaimed Pied Piper was evicted from two homes in Atlanta after failing to pay over $30,000 in back rent and fees. Before his incarceration, the last known place Kelly was living was a townhouse located in Chicago’s Trump Tower.

As a result of the negative net worth, Kelly has become the butt of a joke by rapper 42 Dugg, who posted a video of him and his friends making a mockery of Kelly.

Kelly did claim to be broke on his 20-minute 2018 release “I Admit It.” We’re sure the disgraced singer/songwriter wasn’t lying.