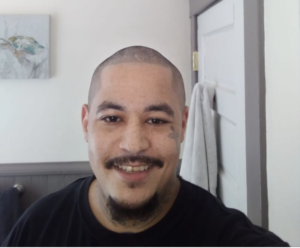 In an incredible act of love and support, an Ohio dad cut his massive, long locs to support his 7-year-old who’s battling cancer.

Rayshawn Mims live-streamed the act of love via Facebook Live on September 16. In the video, 7-year-old Ahkeem Mims looked forlorn as Rayshawn asked him how he felt about losing his hair.

Mims told Ahkeem, as he began to shave his own locs, “Anything you go through, I’ll go through it with you.”

Ahkeem’s battle with bone cancer began on August 3, per the family’s GoFundMe. What Rayshawn and Shannae Mims thought was a knee sprain turned out to be cancer after a trip to the emergency room. Doctors sent the boy to Pittsburgh Children’s Hospital, where he was diagnosed with osteosarcoma. Following Ahkeem’s treatments with chemotherapy, the adorable seven-year-old lost his hair. The family started the GoFundMe to help maintain their family (Shannae can’t work because of her son’s diagnosis). The ask was $5,000, but the family has raised over five times the requested amount.

“I took an extended leave of absence [from work]. Due to his immune system being compromised from chemotherapy, I am unable to work as I run the risk of possibly infecting him with Covid.”

The parents have four other children who are staying with family members while Ahkeem completes his treatment.

Rayshawn took to Facebook to thank everyone for the overwhelming support.

“Woooow! God is Good!! We would like to take this time to thank EVERYONE for your EXTREME Generosity, Love, Support, Prayers, Advice, and Most of all, you who shared your touching testimonies with us!!!!”

“I have honestly read thousands of comments and messages in these last few days and been brought to tears many times over. You are all Amazing and have shined a beautiful light on a dark situation, and for that, we say Thank You!!!”

We wish Ahkeem and his family the very best!​​