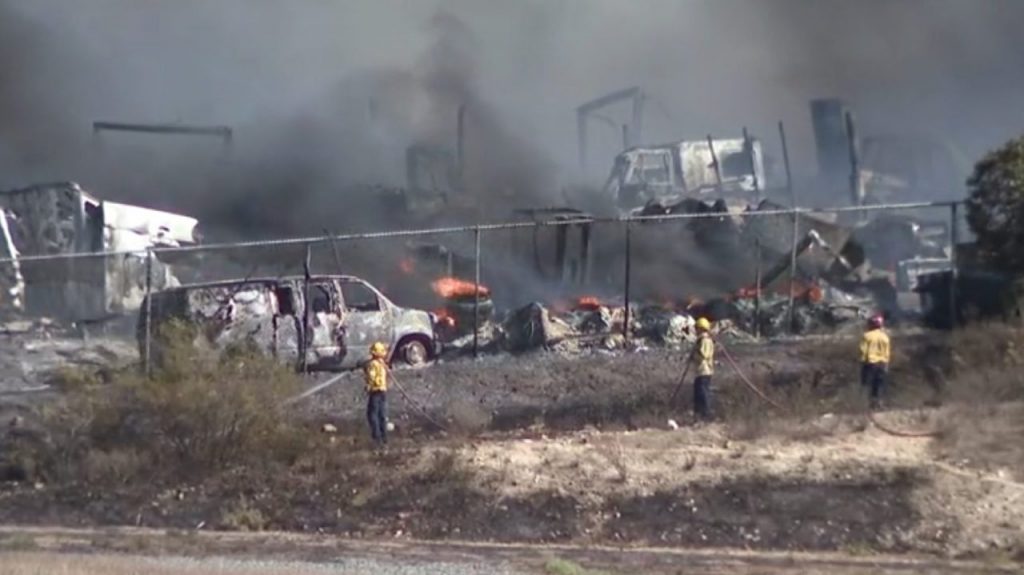 SAN DIEGO — Firefighters described Saturday’s massive fire at an auto wrecking yard in Otay Mesa as a “significant loss” for the business after more than 200 cars were burned due to the blaze that also damaged a home.

Intense flames and heavy black smoke, which could be seen billowing across South Bay and as far north as Clairemont Mesa, consumed an auto wreckage yard and mechanic shop at 1950 Cactus Road after the third-alarm fire broke out around noon.

“I knew something bad was burning, but I didn’t know it was this big,” said Abraheem Fadel, whose car was damaged in the fire. “There are a lot of cars that are burning out here.”

More than 200 cars were destroyed as flames pushed up against several homes, damaging the exterior of one.


Aggressive, invasive mosquitoes are in San Diego and only you can stop them

“There was a very intense fire fight to defend those homes for well over an hour,” said David Gerboth, Deputy Fire Chief for the San Diego Fire-Rescue Department.

At the fire’s peak, more than 150 firefighters attacked the blaze, both from the air and on the ground. Strong winds and a lack of water supply made it difficult for firefighters.

“The embers that were coming off the fire were landing in the large field that is adjacent,” Gerboth said. “It did start multiple vegetation fires, so we used specialized equipment to mitigate that.”

Although 20 people were evacuated, there were no reports on any injuries, but evacuees watched as crews defended people’s property. One man’s truck was spared.

“When I came closer and I saw everything and my first thought was, my truck was in there, so I parked and walked this way and saw my truck, I was like ‘Oh my God, it’s there,’ so I was really happy,” Juan Carlos Guzman said.

However, other customers weren’t as lucky. Fadel dropped his car off for repair earlier, but is now dealing with more damage.

“There is in the rear a little bit, but as long as it’s drivable,” Fadel said. “I don’t know the condition because it still has to get jumped.”

Items like car tires, bumpers, and propane tanks fueled the fire, causing explosions and mass destruction at the auto yard.

“I feel sad for the mechanic,” Guzman said. “He lost all the tools and everything, so I feel bad for him and all the people there.”

There have been several fires in the area over the last few days and investigators are taking a fresh look to find out what exactly started the blaze.