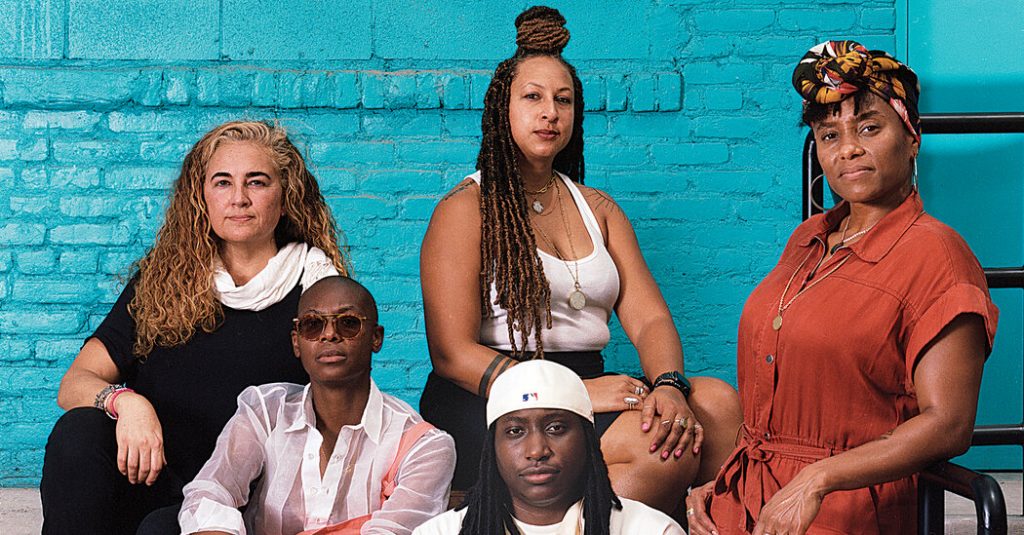 IT’S HARD FOR collectives not to lead with politics, even when their missions are not explicitly political. The word “collective,” after all, arrives prepoliticized, with the presumption of a leftist, even radical bent. Outside of the arts, the most common place one finds “collective” used as a noun is in the context of communism: collectivist farming in the former Soviet Union and in China, for instance, or in reference to workers’ cooperatives and communes. In the United States during the 1960s, arts collectives emerged as a natural outgrowth of the communitarian spirit of youth culture. For artists today, at least part of the pull of the collective might stem from an aspirational, nostalgic desire to recapture a spirit of community that they were not themselves alive to enjoy. Perhaps, too, it is born of a shared sense of longing, even desperation, for answers to seemingly intractable social, political and environmental challenges that stifle the efforts of individuals acting alone.

Indeed, the collectivizing impulse runs counter to the dominant American mode of individualism, which elevates singular achievements over communal ones, perpetuating the myth of self-made success in politics, business, the arts and beyond. So much of daily life in the United States is becoming bespoke and curated: multivitamins formulated for your specific body chemistry; data-driven particulars on how you sleep and how often your heart beats; health treatments keyed to your genetic code. The very structures of wealth in the country are doing the same, skewing dramatically since the Great Recession not just toward a class, or even a percent, but toward a handful of individuals and families we now know by name.

In the arts, too, the individual most often stands above the group. The term “multihyphenate” emerged in recent years to celebrate a new breed of cross-genre creatives — many of whom are people of color, like Lin-Manuel Miranda, Janelle Monáe, Donald Glover, Rihanna and Zendaya — while obscuring the close collaboration with others that makes most of their work possible. The spotlighting nature of nominations and awards perpetuates the mythology of the singular genius creating in isolation. Running counter to the idolatry of the individual is the impulse to collectivize: for anointed individuals to bring their crews along with them, giving them credit, too, where it’s due. We’ve witnessed this recently in the fashion industry. The designer Telfar Clemens’s clothes and handbags are often emblazoned with “Telfar,” or simply with his initials, but his unisex designs are born of collaboration and community. (The brand’s motto is “It’s not for you, it’s for everyone.”) Similarly, Kids of Immigrants, the Los Angeles-based streetwear label founded by Daniel Buezo and Weleh Dennis, styles itself more as a movement than a fashion brand, with community-based initiatives and conscious collaborations (with partners like Vans) that amplify core principles of love and public service. The rise of collectives might also signal a shift in the primacy of certain arts over others. The individual genius of poets and novelists and visual artists has been supplanted by the more transparently collective work done in television and film and music. Who doesn’t want to form a band? Who doesn’t want to be on set? Even the heretofore more solitary arts now bend toward the communal. That they can do so speaks to the fact that they were always more communal and collective than we allowed ourselves to think. As a culture, we are questioning the specious notion of individual genius in favor of the wisdom of the commons.

Though the concept of a collective might seem anachronistic — a throwback to 1960s-era love-ins and hippie communes — it’s often a call for belonging, for protection, and about finding a place like home. Authority Collective’s Melissa Bunni Elian, a 34-year-old multimedia journalist based in Yonkers, N.Y., belongs to multiple collectives for precisely this reason. “You just have your different groups of people for different things,” she explains. In addition to being on the board of A.C., Elian is also a member of the Black Shutter Collective, an invitation-only virtual community of Black photographers. “It’s really a group chat — there are some things that I only want to talk about with Black people, because I need that perfect understanding.”