Two Black Brothers From The U.S. Claim They Were Framed For Murder In Ecuador 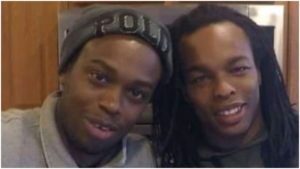 Two Black brothers from the United States have been in prison in Ecuador for crimes they said they didn’t commit.

Ronell and Roja-John “John” Stephenson are speaking from behind bars to anyone who will listen after getting incarcerated for two murders they say they didn’t do.

In June, the brothers appears on the YouTube channel dcbornrob – Erasing Borders where they recalled what happened on March 11, 2017, when police came to their farm in Palora, Ecuador, at 5 a.m. with claims they were running a cocaine plantation and stashing American police weapons on the property.

The Stephensons denied the claims but that’s when an Indigenous family (the Tzamrendas), began digging into their backyard while police searched their four homes. The Tzamrendas uncovered two bodies that were later identified as two boys in their family.

But the Stephensons says they were framed for murder and even pointed out how the Tzamrendas knew exactly where to dig to locate the bodies. The brothers explained how the family arrived at their farm with shovels before the police arrived and even served them with an arrest warrant alongside the police, which they say is illegal.

The brothers think the family made up the claims of cocaine and weapons to get the police on their farm where they had already planted the bodies.

“The police left the natives on our property and let them have a free-for-all and basically do what they want: ransack, burn, loot everything,” John said.

During their YouTube appearance, the brothers said they had been warned about the family and heard about previous foreigners being killed by the tribe.

“[The police] kept insisting that the Indigenous people will come and kill us,” John said.

In the community, the tribe has much power due to people and even the police’s fears of being killed or a victim of their black magic.

“Because [the police] don’t know how to use equal force, they only know how to operate their guns, but they can’t use their guns on them,” Ronell said.

The Maryland natives are hoping to get in contact with Sens. Ben Cardin, Chris Van Hollen, Rep. David Trone in hopes of receiving a fair trial.