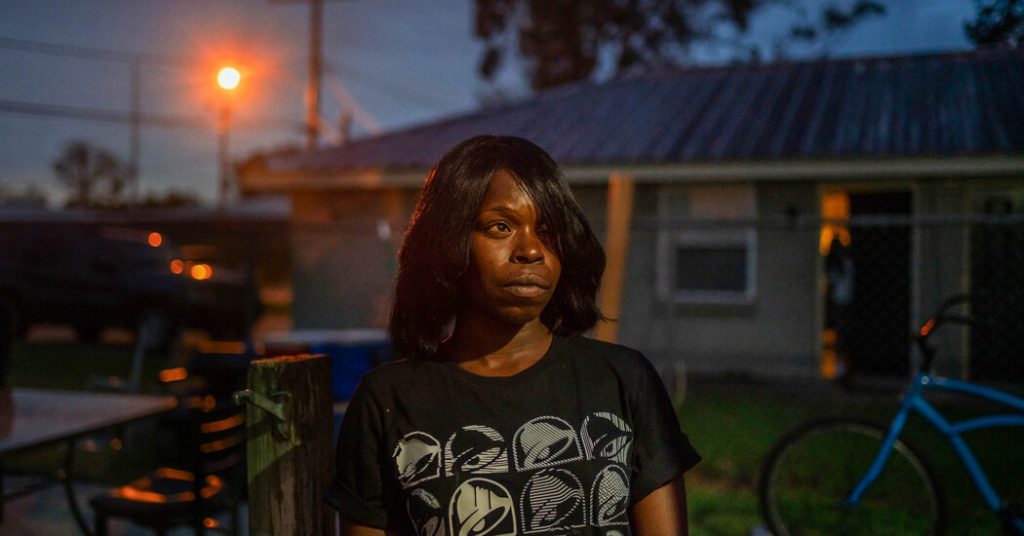 The video is short but harrowing. The camera lens quickly zooms past a car and focuses on the scene behind it: A sheriff’s deputy in Louisiana, who towers over a small Black woman, is slamming her onto the ground.

The woman is lying on her back, and the deputy is hunched over her. He is clenching her left wrist with one hand, and her left forearm with another, and hoisting her body off the ground.

He throws her back onto the ground. Down. Up. Down. Up.

“Someone record that,” a woman off camera can be heard saying.

It appears the deputy is holding her by her hair now. He kneels down, possibly on top of her, and the video cuts out.

It is unclear who took the video, which drew attention after it was posted last month on social media. The two people in the footage were identified as a member of the Jefferson Parish Sheriff’s Office, and Shantel Arnold, 34, by ProPublica’s Local Reporting Network in partnership with WRKF and WWNO, and The Times-Picayune/The New Orleans Advocate. Alanah Odoms, the executive director of the American Civil Liberties Union of Louisiana, confirmed her identity and the details of her account.

Ms. Arnold told ProPublica that before the encounter she was walking home after having been attacked by three boys. That’s when the sheriff’s deputy pulled up in his cruiser and asked her to stop. His intent was unclear. When she didn’t, the deputy got out of his car and attacked her, Ms. Arnold’s stepfather, Lionel Gray, told ProPublica.

The Sheriff’s Office, Ms. Arnold and Mr. Gray did not return emails and phone calls seeking comment on Saturday and Sunday.

After the attack, Ms. Arnold was taken to a hospital with a busted lip, bruises and scratches, ProPublica reported. It said she still gets headaches that stem from the encounter. The Sheriff’s Office did not file charges against her.

Body camera footage is likely not to factor into the investigation because the Sheriff’s Office does not require its personnel to wear body cameras, Ms. Odoms said, despite repeated calls from groups, including the A.C.L.U., to require the devices.

However, on Thursday, Sheriff Joseph P. Lopinto III of Jefferson Parish said he bought 500 body cameras in June that his deputies will be trained to use later this year. He waited until June to buy the cameras, which cost $8.7 million, because his office lacked the budget until recently, he said at a meeting with the Jefferson Parish Democratic Executive Committee.

It is easier for a police officer to get away with harming someone if the encounter is not recorded on a body camera, Ms. Odoms said. Even if there is sufficient evidence, victims of civil rights violations in Louisiana must press charges within a year. In many other states, the statute of limitations is a few years longer.

It is not known if Ms. Arnold plans to press charges against the Jefferson Parish Sheriff’s Office or the deputy involved in the encounter.

In 2018, four Jefferson Parish sheriff’s deputies were accused of — and ultimately not charged with — inflicting “significant traumatic injuries to the neck” of Keeven Robinson, 22, who was arrested and later died. The parents of Eric Parsas, a 16-year-old with autism who died last year after an encounter with law enforcement, filed a federal lawsuit in January against Sheriff Lopinto and seven deputies, claiming the deputies who tried to restrain their son had sat on him for more than nine minutes, leading to his death.

The A.C.L.U. of Louisiana has filed several lawsuits in the past year and a half against the Sheriff’s Office stemming from what it says are incidents of violent beatings and racial profiling.

The practices of the Sheriff’s Office “disproportionately subject Black people to excessive violence and in some cases, death,” the statement said.