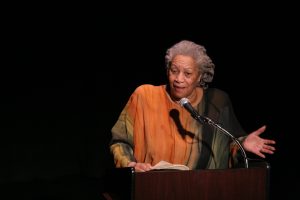 School board members in Virginia Beach are attempting to ban the literary works of the late great novelist Toni Morrison.

School board members Victoria Manning and Laura Hughes have banned together to have four books removed from curriculums due to the “pornographic nature” found in the reading, The Daily Beast reports. Morrison’s classic The Bluest Eye is on the list along with Lawn Boy by Jonathan Evison, A Lesson Before Dying by Ernest Gaines, and the memoir comic Gender Queer by Maia Kobabe.

“It has been brought to my attention by some parents that there are some disturbing books in our district that are available to students,” Manning wrote in a letter sent to Virginia Beach City Public Schools Superintendent Aaron Spence last week.

“I would like to ask that you pull these books from shelves and also block any electronic access by students to getting these books IMMEDIATELY.”

Spence noted in an email that Manning also requested the review of Manning also asked for a review of two additional books — Beyond Magenta by Susan Kuklin and Good Trouble: Lessons from the Civil Rights Playbook by Christopher Noxon, The Virginian-Pilot reports.

Emails regarding the first four books show Manning referring to the literary works as “sexually explicit” content and “pedophilia.” She asked that the books be removed from school libraries and blocked electronically. Manning also wants the district to review every book in the system’s libraries and discipline the staff responsible for adding the books to the curriculum.

While Manning admitted to not reading the books, she said of Morrison’s The Bluest Eye that “just reading a few of the pages gives me utter disgust.”

Spence said all of the physical and digital materials are vetted by instructional staff with the Department of Teaching and Learning.

“What one person finds offensive, others may not,” he said in response to Manning.